The randomizer shows a random comic book related to the Mahabharata, and below that is a listing of all the comic books in this category.

Yudhishthira: Justice for the Pandava. Three stories in which Yudhishthira is tested and proves himself the son of Yama (Dharma) each time.

Tales of Arjuna: The Exploits of an Exceptional Warrior. Read about Arjuna and a mysterious monkey, the story of the burning of Khandava forest, and also the tale of the brahmin's ten sons.

Uloopi: The Naga Princess who Fell in Love with Arjuna. This is the story of Arjuna's wives Ulupi and also Chitranganda, and the battle between Arjuna and his own son, Babhruvahana.

Abhimanyu: Star-Crossed Prince. The story of Abhimanyu, son of Arjuna, and his extraordinary bravery in battle.

Subhadra: Beloved Sister of Krishna and Balarama. This is the story of how Subhadra became the wife, not of Duryodhana, but of Arjuna instead.

Krishna and Shishupala: He Was Forgiven a Hundred Times. The story of Shishupala's ominous birth and his slaying by Krishna.

Krishna and Jarasandha: Krishna Outsmarts His Fierce Adversary. The story of Jarasandha's weird birth and his bitter enmity with Krishna.

Gandhari, A Mother Blinded by Love. You can read about Gandhari's righteous life as the wife of King Dhritarashtra and the mother of Duryodhana.

Drona: Valiant Archer, Supreme Teacher. A story about comebacks and paybacks, attacks and counterattacks, from Drona's birth until his death.

Karna: Brave, Generous, Ill-Fated Prince. This comic book begins with Karna's supernatural birth and ends with his death of the field of Kurukshetra.


SUMMARY ONLY (no Reading Guide):

Mahabharata: The Great Epic of India. A single-volume take on the overall scope of the epic story!

Bheeshma: Selflessness Personified. This comic book focuses on the "grandfather," the wise and might Bhishma who, although he knew better, remained loyal to Duryodhana's side in the great war.

The Pandava Princes: Pandu's Five Brave Sons. This comic book focuses on the younger years of the Pandavas, leading up to Yudhishthira's installation as emperor in the beautiful palace at Indraprastha.

Draupadi: The Dusky Firebrand. This comic book begins with Draupadi's emergence from the fire and ends with the downfall of the Kauravas, the destiny that was foretold from her birth.

The Pandavas in Hiding: Outwitting a Wily Enemy. This comic book tells the story of the Pandavas' thirteen years of exile following the disastrous game of dice.

Bheema and Hanuman: The Sons of Vayu, The Wind God. During their long exile, Bhima actually encounters Hanuman who is also a son of the wind god, Vayu.

The Gita: The Song of Eternal Wisdom. The story of Arjuna's moment of doubt before the great battle, and the song of wisdom that Krishna sings to him.

Jayadratha: Retold from the Mahabharata. This comic book focuses on the life and death of Jayadratha, one of Duryodhana's strongest allies and thus one of the Pandavas' greatest enemies.


There is also a massive, three-volume edition of the Mahabharata which consists of 42 separate comic books bound together; it's available for regular check-out in Bizzell. 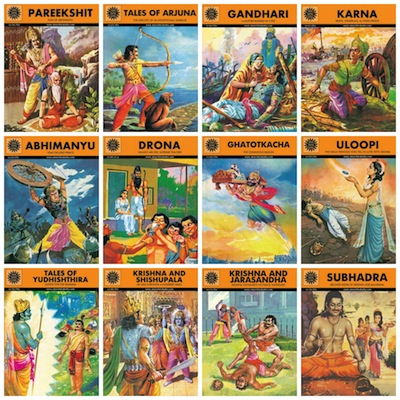