This is a guide to Pareekshit: Son of Abhimanyu (Volume 762). You can find it at Amazon. 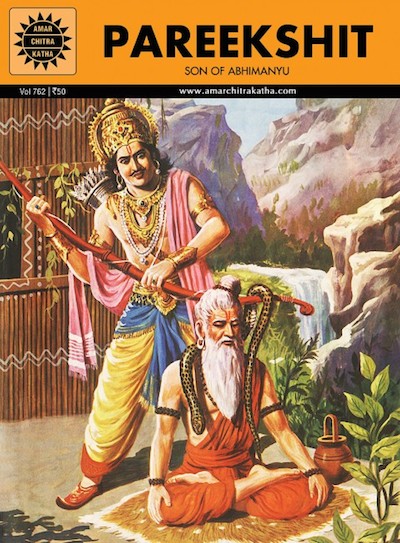 King Parikshit and the Sage (pp. 1-10). Pareekshit, King of Hastinapura, goes hunting. He enters the hut of a sage who has taken a vow of silence. When the sage does not speak to him, Pareekshit drapes a dead snake over the sage's shoulders. A young brahman priest reports this to the sage's son, Shringi. Shringi curses Pareekshit, saying that the snake Takshaka will kill Pareekshit in a week. To try to save himself, Pareekshit builds a palace at the top of a pillar surrounded by guards where he can spend the week.


Additional reading: Pareekshit is the son of Abhimanyu, who is the son of Arjuna, one of the five Pandava brothers. Parikshit is thus from the only surviving line of descent among all the heroes who fought in the Battle of Kurukshetra. The comic book does not give the name of the sage: it is Shamika. You can learn more about the nagas (snakes) at Wikipedia also.

The Poison Antidote (pp. 10-14). A poor brahman priest, Kashyapa, is on his way to Hastinapura; he knows an antidote that will work even for Takshaka's poison. He meets Takshaka in human form and proves how his antidote works. Takshaka bribes the priest to go home.


Additional reading: You can find out more about Takshaka at Wikipedia.

Takshaka and Parikshit (pp. 11-19). Takshaka summons more snakes who take the form of brahmans carrying fruit, and then he disguises himself as a worm in one of the fruits. The guards let the priests in to see King Pareekshit. Pareekshit takes the fruit with the worm in it. Takshaka reveals his true form as a giant snake, kills the king, and leaves through the window.


Additional reading: The naga Takshaka was a master of disguise; you can read another story about him here — Uttanka — in which he disguises himself as a brahmin in order to steal some earrings from Uttanka.

King Janamejaya's Revenge (pp. 20-24). Janamejaya, Pareekshit's young son, becomes king. When he grows up and learns how his father died, he vows revenge on Takshaka and declares that he will kill every naga in the world. He orders his priests to perform a sarpasatra snake sacrifice which will summon the snakes and compel them to jump into the fire.


Additional reading: You can read more about Janamejaya at Wikipedia. Janamejaya was a direct descendant of the Pandavas, and he was also the king to whom the Mahabharata itself was first recited by the sage Vaishampayana, a pupil of Vyasa, who was a character in the Mahabharata himself, father of both Pandu and Dhritarashtra, making him Janamejaya's great-great-great-grandfather (Vyasa-Pandu-Arjuna-Abhimanyu-Parikshit-Janamejaya).

Astika (pp. 24-27). The priests call upon the snakes one by one, and Agni, the fire god, consumes them. Because he is protected by the god Indra, Takshaka does not come. Indra promises that Astika, son of a human father and naga mother, will stop the sacrifice. Vasuki, king of the nagas, and tells Astika about the sacrifice, but the priests refuse to let Astika near the altar.


Additional reading: See Wikipedia for more about the gods Agni and Indra. There is also a detailed article about Vasuki, along with an article about Astika. The name Astika is also seen in the compound Su-Astika, which gives us the word swastika in English, meaning "lucky, fortunate."

Peace (pp. 28-31). The priests summon both Indra and Takshaka who are dragged towards the fire. Indra flees, and Takshaka begins to descend into the flames. Astika commands Takshaka to halt in midair, and then he calls out to King Janameyaja who tells the priests to let Astika come in. Astika asks Janameyaja to make peace with the nagas. At first the king refuses, but then he agrees to stop the sacrifice, and there is peace and happiness among both the humans and the nagas.


Additional reading: See the Wikipedia article on Swaha to understand p. 28 where the priests are shouting "Swaha!"