This is a guide to Tales of Arjuna: The Exploits of an Exceptional Warrior (Volume 525). You can find it at Amazon. 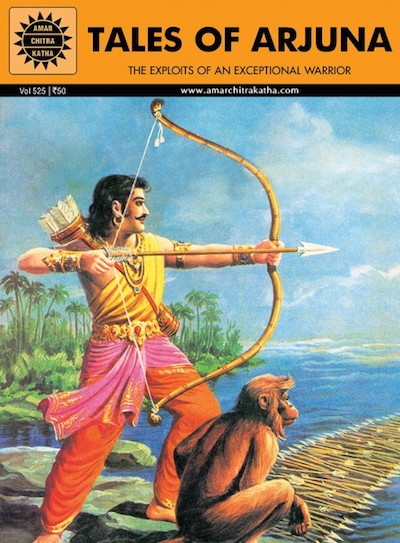 Arjuna, The Monkey, and the Boy (pp. 1-8). When Arjuna comes to Rama's Bridge at Rameshwaram, he is surprised Rama used the help of monkeys instead of building a bridge of arrows. A monkey laughs and challenges Arjuna to build a bridge of arrows that will support his weight. With arrows from Agni's quiver, Arjuna builds the bridge, but it collapse when the monkey touches it. Arjuna tries again, and fails, so now he must immolate himself as promised. Just before Arjuna jumps into the flames, a mysterious boy appears on the scene who disputes the terms of the bet. The boy proposes to repeat the contest now with a witness, and this time the bridge holds, so the monkey makes himself gigantic, revealing himself as Hanuman. The bridge still holds, and Hanuman realizes the boy is Krishna in diguise; he and Arjuna both worship him as Vishnu. Vishnu explains that he wanted to teach them both a lesson about humility, and henceforth Arjuna will have Hanuman as the emblem on his flag.


Additional reading: You can learn more about Rameshwaram and its monuments at Wikipedia: Rameshwaram, and also in the article about Rama's Bridge, which is also known as Wikipedia: Adam's Bridge. Both Rama and Krishna are avatars of Vishnu; you can read more about Vishnu's avatars at Wikipedia: Dashavatara. Hanuman is indeed alive at the time of events of the Mahabharata; in a famous incident, Hanuman meets Bhima, too.

Arjuna Defeats Indra (pp. 9-22). For twelve years, a king sacrifices to Agni, the fire god, pouring ghee (butter) into the sacrificial fire. All that butter makes Agni ill! Brahma tells him to go eat the Khandava forest to feel better. Indra is upset that Agni is burning the forest where Takshaka the king of the nagas lives, so Indra rains down on Agni. Brahma tells Agni to seek help from Arjuna and Krishna. Disguised as a brahmin, Agni asks them for help, and he summons Varuna to give the Gandiva bow and inexhaustible quiver to Arjuna, and the Sudarshana chakra to Krishna, along with a chariot. Krishna fights the forest dwellers, and Arjuna fights the gods, stopping Indra's rain with a canopy of arrows and rendering Indra powerless with the Vayavya, the weapon of Vayu, the wind god. Together, Krishna and Arjuna fight off all the gods, the nagas, and asuras. Indra hurls the peak of Mandara mountain at Arjuna, who shatters it with arrows. Indra is impressed, and when he learns Takshaka is safe, he yields. The Maya Asura seeks refuge with Arjuna, even as Agni keeps on burning. Indra bestows boons on Krishna and Arjuna, and Agni promises to help them at any time, and Maya promises to build a great palace for Yudhishthira, Arjuna's brother. This is the palace that drove Duryodhana, the elder of the Kaurava brothers, mad with envy, eventually leading to the Great War.


Additional reading: The famous burning of Khandava forest is an important event in the Mahabharata, and you can read more at Wikipedia: Khandava. For more about Takshaka, see this comic book: Parikshit (and Parikshit happens to be Arjuna's grandson).

Arjuna Humbled (pp. 23-31). A brahmin who has lost nine sons already begs Arjuna for help, and Arjuna vows to protect the brahmin's tenth son, vowing to defeat even Yama, the god of death. When the son is born, Arjuna surrounds the brahmin's hut with arrows and stands outside to face Yama, yet the baby vanishes. Arjuna rides off in a celestial chariot to find the baby, but he fails. Now he must immolate himself as promised. Krishna intervenes, and he and Arjuna journey into the regions of night in the west, and finally they come to Vishnu's home. All the sons of the brahmin are there; Vishnu took them to get Arjuna's attention. Arjuna realizes that it is humility and faith that will be victorious, not vanity, and he takes the brahmin's ten sons back to their home.


Additional reading: This story forms the subject of a dance-drama from Kerala: "The progeny of Krishna" by the 18th-century poet Mandavappalli Ittiraricha Menon, based on a story in the Bhagavata Purana (X.89.22–66).