The randomizer shows a random comic book related to the Ramayana, and below that is a listing of all the comic books in this category.

Each of the Ramayana comic books has a detailed Reading Guide with notes and links:


The Sons of Rama: Luv and Kush — The Invincible Twins. The story of how Rama finally met his sons, Luv and Kush, after sending Sita into exile.

Dasharatha: The Story of Rama's Father. This story begins with the momentous hunting accident in Dasharatha's youth and ends with his death.

Hanuman: The Epitome of Devotion and Courage. Here you will read about all the great feats that Hanuman performed as Rama's most devoted follower.

Hanuman to the Rescue: Hanuman Brings the Sanjeevani. Find out how and why Hanuman carried a mountain through the sky.

Vali: The Downfall of an Arrogant King. Here you will find the story of Vali's fatal quarrel with his brother Sugriva.

Ravana Humbled: An Arrogant King Finds New Friends. Here you can read about Ravana's encounters with Shiva, Kartavirya, and the monkey-king Vali.

The Lord of Lanka: The Rise and Fall of a Demon King. This comic book goes from Ravana's birth to his death, and includes the stories of Vedavati and Rambha also.

Kubera: The Lord of Wealth. You will read about the life of Kubera, the virtuous lord of wealth, and his long struggle with Ravana, who is his own half-brother.

Kumbhakarna: The Sleeping Giant. This tells the story of Kumbhakarna, Ravana's gigantic brother.

Mahiravana: A Magician Outwitted. This is the story of Ravana's son and his plan to kidnap Rama and Lakshmana in order to sacrifice them to Durga.

Vishvamitra: The King Who Became an Ascetic. The story of how King Vishvamitra became a rishi, a rajarshi, a maharishi, and finally a brahmarshi, the greatest of all sages.

Heroes of Hampi: The Mythology of Kishkindha. This book includes legends of Shiva, Hanuman, and also the brothers Hakka and Bukka who founded the great kingdom of Vijayanagara. 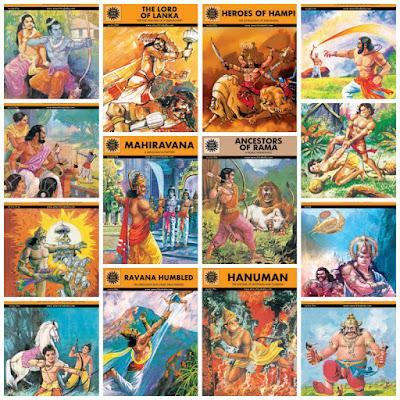