This is a guide to Vishvamitra: The King Who Became an Ascetic (Volume 599). You can find it at Amazon. 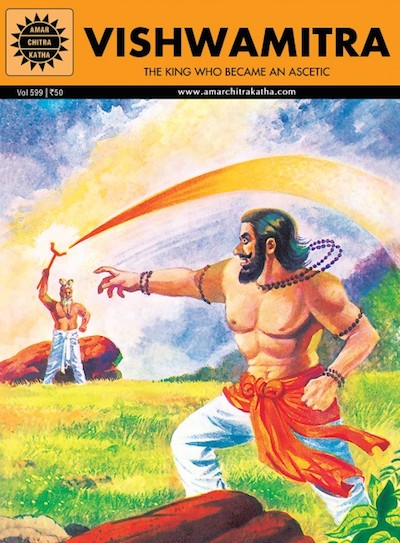 Vishvamitra and Vasishtha (pp. 1-4). As the story begins, note that Vishvamitra is a king. He is impressed by the lifestyle of the sage Vashishtha. Vishvamitra is also amazed by Vashishtha's cow Kamadhenu, but Vashishtha refuses to sell him the cow at any price.


Additional reading: You can read about these two very famous figures at Wikipedia: Vishvamitra and Vashishtha. There is also an article about Kamadhenu!


Additional reading: The power of the sages often manifests in the form of heat. For more about the "heat" of spiritual practices, see this article about tapas at Wikipedia.

Vishvamitra's New Powers (pp. 8-13). Vishvamitra bestows the kingdom on his one remaining son and goes to the Himalayas to practice austerities. Shiva rewards him with a knowledge of weapons and warfare, and Vishvamitra then challenges Vashishtha. Vashishtha halted all of his weapons, even the Brahmastra. Vishvamitra vows to become a great sage, a brahmarshi, like Vashishtha. Vishvamitra takes his queen to live with him in a hermitage, and she gives birth to more sons there. The god Brahma recognizes Vishvamitra as a rajarshi, "king-become-rishi."


Additional reading: The supernatural Brahmastra weapon also has an article at Wikipedia. You can also read about rishis at Wikipedia, and there is also an article about brahmarshis and about rajarshis.

Trishanku's Wish (pp. 13-18). While Vishvamitra is becoming a sage in his own right, King Trishanku seeks Vashishta's help to visit heaven because Vashishtha is his guru. When Vashishtha refuses him, he goes to Vashishtha's sons for help. They are outraged and curse him to become a chandala (lower caste or outcaste). In desperation, Trishanku goes to Vishvamitra, and Vishvamitra agrees to help him. The devas (gods), however, do not respond to Vishvamitra's sacrifice.


Additional reading: You can read more about Trishanku at Wikipedia. There is also an article about chandalas, and you can also learn about gurus there.

Trishanku's Fate (pp. 18-21). Vishvamitra then uses his own powers to cause Trishanku to ascend to heaven, but the gods push him back. Vishvamitra creates a new heaven in the sky for Trishanku, and vows to make Trishanku king of the gods. The gods agree to let Trishanku remain in heaven as a constellation, head down, and now they fear Vishvamitra's powers.


Additional reading: The constellation associated with Trishanku in the Indian tradition is the one that is called "The Southern Cross" in the European tradition. You can read more about that constellation at Wikipedia.

Ambarisha (pp. 21-24). Ambarisha, the king of Ayodhya, has lost his sacrificial animal. In fact, the god Indra has stolen it. Seeking a human sacrifice, Ambarisha goes to the sage Richika and asks him for his son. Richika refuses, but his son Shunahshepa volunteers. On their way back to Ayodhya, they pass by the hermitage of Shunahshepa's uncle: Vishvamitra! None of Vishvamitra's sons will take Shunahshepa's place, so Vishvamitra curses his sons and then teaches Shunahshepa powerful mantras to use for protection. Hearing the mantras, Indra spares Shunahshepa from the sacrifice.


Additional reading: You can read more about the god Indra at Wikipedia. There are is also an article about Ambarisha. You can also learn about the power of mantras.

Menaka (pp. 25-27). While practicing his spiritual discipline, Vishvamitra sees the sage Menaka and falls in love with her. Only later, he realizes the gods sent her to entrap him. He sends Menaka away, returns to his spiritual practices, and finally Brahma recognizes him as a maharshi (great-rishi), but Vishvamitra still wants to be a brahmarshi and practices even greater austerities.


Additional reading: There are articles at Wikipedia about Menaka and about the other heavenly nymphs called apsaras in Sanskrit.

Rambha (pp. 28-32). The god Indra decides to tempt Vishvamitra again, this time with the apsara named Rambha. She is frightened and refuses, but Indra promises to protect her, disguising himself as a cuckoo. Vishvamitra sees through the trick and curses Rambha to turn into a rock. Indra tries again to trick Vishvamitra, but Vishvamitra keeps getting stronger and stronger. Brahma finally makes Vishvamitra a brahmarshi, and Vashishtha salutes him.


Additional reading: You can read more about Rambha at Wikipedia; she plays an important role in Ravana's life story!