This is a guide to Kubera: The Lord of Wealth (Volume 839). You can find it at Amazon. 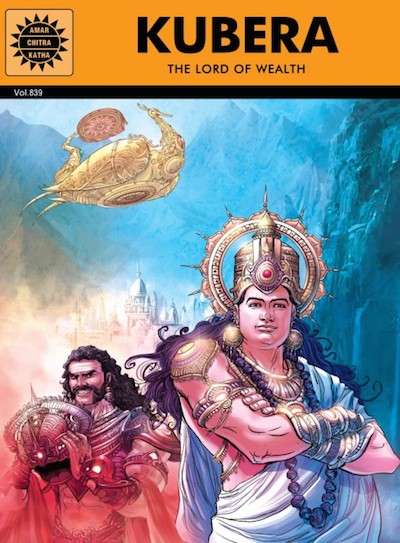 Kubera's Birth (pp. 1-5). The sage Pulastya, son of the god Brahma, comes to the ashram of sage Trinabindu, and he marries Trinabindu's daughter. Their child is Vishrava. When the virtuous Vishrava grows up, sage Bharadwaja arranges for Vishrava to marry his daughter, and their child is Vaisravana, also known as Kubera. Thanks to his austerities, Kubera impresses his great-grandfather Brahma. Kubera asks to be a lokapala, a guardian of the world. Brahma makes Kubera the guardian of wealth and he gives him the flying Pushpaka chariot, made by Vishvakarma, architect of the gods. Vishravan then advises his son to go live in Lanka.

The Story of Lanka (pp. 5-7). Vayu the wind god and Vasuki the cosmic serpent once had a contest to see who was strongest. Vasuki wrapped around Mount Meru while Vayu tried to blow the mountain away. Vishnu ordered them to stop and when Vasuki let go, Vayu's breath blew the peak of Trikuta off the mountain. It landed in the sea, and that was the origin of Lanka, which would later be the home of the rakshasas.


Additional reading: You can read about Mount Meru at Wikipedia, which is a sacred mountain in the Hindu, Buddhist, and Jain religions, and there is also an article about peak Trikuta. You can learn more about Vayu and Vasuki too!

Rakshasas in Lanka (pp. 7-10). When reciting the Vedas, the god Brahma felt hungry and his hunger gave birth to Praheti, a yaksha, and Heti, a rakshasa. Heti's son married Bhaya, sister of the god Yama, and their son Vidyutkesa had a son with the giantess Salakantaka, but the abandoned the baby. Shiva and Parvati rescued the child, who was named Sukesa. Parvati commanded that all rakshasas be born as adults, and so able to care for themselves, and Shiva bestowed great wealth on Sukesa. With a gandharva wife Sukesa had three sons: Malyavan, Sumali and Mali, but they used their powers for wicked purposes. They went to Lanka, living in a city built of solid gold by the divine architect Vishvakarma.


Additional reading: See Wikipedia for more about the rakshasas and yakshas. You can also learn more there about Vishvakarma, the divine architect and engineer. There is also a special section in that article about the construction of Lanka.

Kubera in Lanka (pp. 10-13). Malyavan, Sumali, and Mali challenged the gods, and the gods went to Vishnu for help. Vishnu led an attack, riding on Garuda, and he killed Mali with the Sudarshan chakra. Malyavan and Sumali retreated to Lanka, but Vishnu vowed to destroy them even there, so the rakshasas then fled to Patala, the underworld, abandoning Lanka. Kubera now goes to live in Lanka, ruling over the yakshas as their king.


Additional reading: You can read more about Vishnu and his Sudarshan weapon at Wikipedia, and also about Garuda, who is Vishnu's vahana (vehicle). There is an article about Patala too!

Dashagriva, Son of Vishrava (pp. 14-18). When Sumali seeks Kubera's wealth, he decides to make his daughter Kaikesi the wife of Vishrava, the father of Kubera. Vishrava predicts that all their children, with one exception, will be wicked. They had four children: one daughter Shurpanakha and three sons — the ten-headed Dashagriva, Kumbhakarna, and Vibhishana. Vibhishana was the virtuous one of the four. When Kubera comes to visit his father, Kaikesi urges Dashagriva to make himself greater than Kubera. To gain power, Dashagriva cuts off his heads, one by one, and his brothers also do penances. Brahma grants them boons: Vibhishana asks to always be virtuous, and, thanks to a trick of the goddess Saraswati, Kumbhakarna asks to sleep for ages. Dashagriva asks for immortality, but Brahma refuses, so Dashagriva asks to be invincible, protected against other powerful beings, but he omits humans from the long list of beings.


Additional reading: Of course, Dashagriva is Ravana; he will gain that name later, but Dashagriva is his birth name. You can read about all four of the rakshasas at Wikipedia: Ravana, Shurpanakha, Kumbhakarna, and Vibhishana.

Kubera Leaves Lanka (pp. 18-23). Sumali urges his grandson Dashagriva to take Lanka back from Kubera. At first Dashagriva is reluctant to fight his brother (half-brother). When he thinks about how the devas (gods) and the daityas are brother races (again, half-brothers) who are at war with one another, he changes his mind. Dashgriva demands that Kubera return Lanka to the Sumali and the rakshasas. Kubera agrees, but their father Vishrava urges Kubera to escape to the Himalayas, and there Kubera builds the city of Alakapuri.


Additional reading: There is an article at Wikipedia about Alakapuri, along with an article about Mount Kailash, which is the sacred abode of the god Shiva also — and remember that Shiva played an important role in this story, too, rescuing the infant Sukesa, the father of Sumali, Ravana's maternal grandfather.

Dashagriva Attacks Kubera (pp. 24-29). King Dashagriva now leads the rakshasas into a war with all the three worlds, including devaloka, the home of the gods. Kubera asks Dashagriva to cease his attacks. Dashagriva is enraged and decides the time has come to attack Kubera's stronghold of Alakapuri. Although the yakshas are strong and possess magical powers, the rakshasa army defeats them. Even Manibhadra, Kubera's minister, falls in battle. Kubera then duels with Dashagriva. Kubera uses an Angeyastra (an Agni-weapon of fire), which Dashagriva answers with a Varunastra (a Varuna-weapon of water). Although Kubera cannot be killed, Dashagriva overwhelms him completely and steals the Pushpaka.

Rama Defeats Dashagriva (pp. 29-30). Years later, Rama, an avatar of Vishnu, builds a bridge to Lanka and defeats Dashagriva, now called Ravana, in battle, killing him at last. He makes Ravana's virtuous brother, Vibhishana, the king of Lanka. Rama flies the Pushpaka back to Ayodhya, and then returns the flying chariot to its rightful owner: Kubera.


Additional reading: Rama's defeat of Ravana is the subject of the epic Ramayana of course!