This is a guide to Heroes of Hampi: The Mythology of Kishkindha (Volume 826). You can find it at Amazon.

In the commentary below, I have provided links so that you can compare the comic book version with other accounts of the story and/or important background information.


You can find out more about the prior history of the brothers Hakka and Bukka in another comic book:  Hakka and Bukka: Founders of the Vijaynagar Empire. 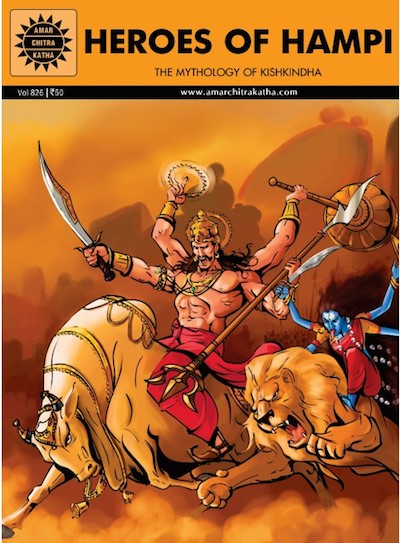 The Brothers (pp. 1-5). Hampi is located on the Tungabhadra river, and you can see ruins of ancient times there today. In the 14th century, Muslim forces from Delhi in the north attack Hampi, and the brothers Hakka and Bukka defend their territory. While hunting, they see a fiercely brave rabbit. A mysterious old man tells them the rabbit is a sign that they will become kings, and he then tells them the history of Hampi, land of heroes. He begins with the story of Pampa, a name used long ago for the Tungabhadra.


Additional reading: See Wikipedia for more about Hampi, a UNESCO World Heritage site, and the Tungabhadra River valley, and you can also read about the geography of the great Deccan plateau of central and southern India. There is even an article about the crocodile-like makara, the vahana (vehicle) of the goddess Ganga. The brothers here are historical figures, too: Hakka and Bukka.

Shiva, Sati and Veerbhadra (pp. 5-9). The god Shiva has a wife named Sati, but her father Daksha disapproves. In anger, Sati immolates herself, and Shiva's bull Nandi must bring Shiva the sad news. Enraged, Shiva conjures up a supernatural warrior, Veerbhadra, who beheads Daksha. The other gods fear Veerbhadra's unstoppable wrath, and Vishnu attempts to placate him with lotuses, including his own lotus eye. Appeased, Veerbhadra gives Vishnu the Sudarshan chakra. This happened at Chakratirtha, on the river Pampa.

Pampa (pp. 10-12). Sati is then reborn as the river goddess Pampa, with the god Brahma as her father. As she awaits Shiva, she rescues a sage who falls into the river; he is Shiva in disguise! As they get married, a shower of gold comes down, and the place is now called Hemakuta, Hill of Gold. As it turns out, the brothers are sitting with the old man on Hemakuta as he tells them the story. The next story will be about the monkey kingdom of Kishkindha.


Additional reading: You can visit Hemakuta in Hampi even today, and the hill offers a view of the surrounding temple complex: photo. In modern times, Pampa is a lake, rather than a river: Pampa Sarovar.

King Vali of Kishkindha (pp. 13-14). Vali, king of the monkeys of Kishkindha, has a special gift: he gains half the strength of any opponent he fights. Anjana, a celestial apsara who is cursed to live as a monkey, comes to the kingdom. She prays to Shiva to give her a son. Vali is frightened that this son will be as strong as Shiva, so he decides to pour melted panchaloha (five-metals) on Anjana's belly. She is not harmed and gives birth to Hanuman, and entrusts him to the bear Jambavan.


Additional reading: You can read more about Vali and the kingdom of Kishkindha at Wikipedia. The tradition that Hanuman is a son of Shiva or an avatar of Shiva is not found in Valmiki's Ramayana, but it is a widespread belief dating to perhaps the 8th century. You can also read about the apsara Anjana and the bear Jambavan at Wikipedia. There is even an article about the panchaloha and the metals it contains!

Little Hanuman (pp. 14-17). Baby Hanuman is both strong and mischievous. When Hanuman ties together the tails of an elephant and a lion, an angry rishi (sage) curses him to forget his own supernatural powers until reminded of them. Jambavan overhears the curse and knows that one day he will have to remind Hanuman of his powers. Hanuman then asks the sun-god Surya to be his guru, promising not to scare the little Valakhilyas, the thumb-sized sages. Surya teaches him the Vedas and the Shastras. Hanuman then pays the guru price, dakshina, promising to protect the monkey Sugriva, Surya's son, from his brother Vali.


Additional reading: You can read more about Surya and about the Valakhilyas at Wikipedia, and you can also read about Surya's son, the monkey Sugriva. There are also articles about the Vedas and Shastras, and also about the dakshina.

Vali and Mayavi (pp. 17-21). Hanuman befriends Sugriva, arousing Vali's jealousy. Then the demon Mayavi challenges Vali to a fight. Vali chases Mayavi into a cave, leaving Sugriva at the entrance. When Sugriva sees blood coming from the cave, he concludes Vali is dead and seals the entrance, becoming king in Vali's place. But Vali comes back and chases Sugriva from the kingdom. Hanuman joins Sugriva in exile. They go to Rishyamukha Hill, a place forbidden to Vali because he defiled the land there and was cursed. The old man shows Hakka and Bukka the cave where Vali and Sugriva lived on Rishyamukha.


Additional reading: You can read about Vali's battle with the demon Mayavi and also with the demon Dundubhi in this comic book: Vali: The Downfall of an Arrogant King.

Rama (pp. 22-23). One day, Sugriva and Hanuman see jewelry falling out of the sky. They then see two strangers calling the name "Sita!" The two strangers, Rama and Lakshmana, help Sugriva defeat Vali, and then Sugriva sends his monkeys in search of Sita. Hanuman and Jambavan go to the southern tip of India, and then Jambavan reminds Hanuman of his supernatural powers. Hanuman then leaps all the way to Lanka.


Additional reading: These two pages briefly summarize the plot of the Ramayana!

Hanuman's Reward (pp. 24-27). After Sita's rescue, Rama wants to grant Hanuman a reward. The sage Narada helps Hanuman decide that he wants a temple, and Rama urges Hanuman to pray to Shiva. Shiva refers him to Veerbhadra who gives Hanuman a tiny idol, which then grows to a gigantic size. Hanuman builds a temple around it, now called the Uddana Veerbhadra Temple.


Additional reading: You can read more about Narada at Wikipedia. The temple is part of the Hampi complex: Uddana Veerbhadra Temple.

The Brothers' Kingdom (pp. 27-31). Hakka and Bukka decide to build a fort, and the old man then leaves him. They seek him in the forest and learn that his name is Vidyaranya. The brothers think about naming the kingdom Vidyanagara, "kingdom of learning," or Vijayanagara, "kingdom of victory." They name the kingdom Vijayanagara, Vidyaranya becomes their advisor. There is a map of the Hampi ruins on p. 30.


Additional reading: You can read about Vidyaranya at Wikipedia, and there is also an article about the great kingdom of Vijayanagara, a UNESCO World Heritage site.