This is a guide to Hakka and Bukka: Founders of the Vijaynagar Empire (Volume 795). You can find it at Amazon.

You can read more at Wikipedia about Hakka, Bukka, and the Vijaynagar Empire of southern India. This comic book begins in the year 1310 when the sultan's army from Delhi in the north was attacking the south, preparing to invade. Hakka and Bukka help defend the south; at a desperate moment, the women undertake the act of Jauhar (more about that gruesome ritual at Wikipedia). In defeat, the brothers must disguise themselves and go into hiding; that is when they meet sage Vidyaranya who uses the words of the Bhagavad-Gita to summon men to their army ("And the Lord said: Action, then, O Arjuna, is thy duty; the fruit thereof is not thy concern"). The comic book ends with the omen of the dog and the rabbit at the place where the brothers mark the place that will be their city of victory, Vijayanagara.

You can also read about Hakka and Bukka in this comic book: Heroes of Hampi, which has a detailed reading guide (not just a quick summary as here). That comic book begins where this one ends, with the omen of the dog and the rabbit. 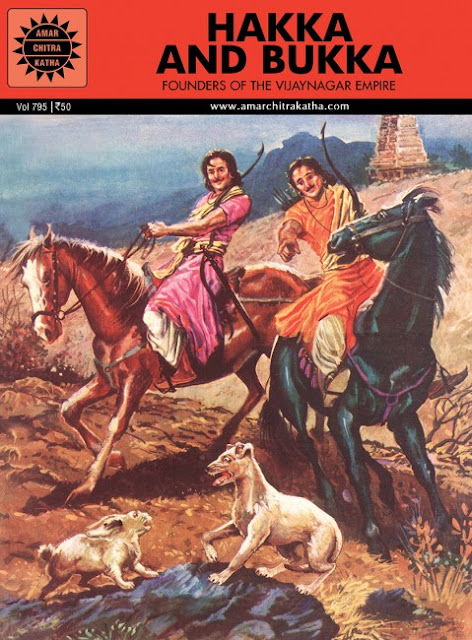