This is a guide to Mahiravana: A Magician Outwitted (Volume 526). You can find it at Amazon. 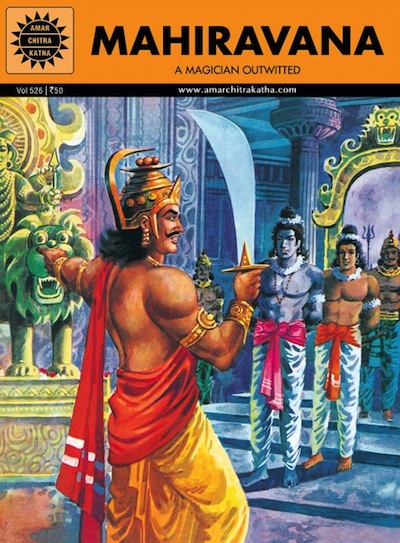 Mahiravana (pp. 1-6). Mahiravana, magician, king of the netherworld, senses that his father, Ravana, needs his help, so he goes to Lanka. Ravana has summoned him in desperation after the deaths of his brother Kumbhakarna and his son Indrajit in battle. Ravana tells Mahiravana about Rama, Sita, and Hanuman. Mahiravana promises to help Ravana defeat Rama.


Additional reading: The story of Mahiravana (Ahiravana) is not found in Valmiki's Ramayana. Instead, it is found in other versions of the Ramayana. Sometimes Mahiravana is the brother of Ravana, and sometimes his son. You can read another version of the story of Ahiravana at Wikipedia. (It is quite different from the version here in the comic book!)

The Fortress (pp. 6-11). Ravana's brother Vibhishana (now loyal to Rama) takes the form of a bird to spy on Ravana. He tells Rama about Mahiravana. Stretching his tail, Hanuman builds a fortress to protect Rama and Lakshamana, with the discus Sudarshan on top of the fortress to keep watch while Hanuman stands guard on the ground.


Additional reading: You can read about the Sudarshana Chakra (discus) of the god Vishnu at Wikipedia.

The Tunnel (pp. 12-19). Meanwhile, Mahiravana plans to kidnap Rama and Lakshmana and sacrifice them to the goddess Durga. Mahiravana disguises himself as King Dasharatha in order to enter the fortress, and then as Bharata. These tricks fails, but when he pretends to be Vibhishana, Hanuman lets him in. When the real Vibhishana shows up, they rush inside but it's too late: Mahiravana has taken Rama and Lakshmana out through a tunnel, while all the rest of the army is fast asleep.


Additional reading: You can read about the goddess Durga, one of the many manifestation of Devi (the goddess), at Wikipedia.

Hanuman in the Nether World (pp. 19-23). Hanuman goes on a rescue mission, following the tunnel that Mahiravana used to get out of the fortress. Although Hanuman hides in a tree, two women see him and from their conversation he learns of a prophecy that says that the arrival of monkeys and men mean that Mahiravana is doomed. Hanuman also learns that the sacrifice to Durga is about to begin, so he finds the temple and enters, disguised as a fly.


Additional reading: You can find out more about Patala, the nether world, at Wikipedia.


Additional reading: The story of Mahiravana is usually connected with Hanuman Panchamukha, "Five-Faced Hanuman." You might want to read that story at Wikipedia. It is a very cool story about why Hanuman needed to assume his five-faced form to rescue Rama and Lakshmana from Mahiravana. You can also find the story told in the Wikipedia article about Anjaneri, Hanuman's birthplace.