This is a guide to Indra and Shachi: The Lord of Heaven and his Devoted Wife (Volume 567). You can find it at Amazon.

Summary: The three-headed Trishiras, son of Tvashta, is a sworn enemy of Indra. Indra defeats Trishiras, but must do penance for his crime. Tvashta creates the asura Vritra to avenge his son's death. Indra pretends to make peace with Vritra and then kills him; ashamed of his deceit, he runs away, which causes chaos on earth. The gods invite the mortal Nahusha to take Indra's place, but they are not happy under his rule. Indra's queen, Shachi, flees Nahusha's advances. The gods seek out Indra and ask him to expel Nahusha from heaven. Upashruti, the night goddess, escorts Shachi to Indra and they come up with a plan to defeat Nahusha when he is being carried in a palanquin by the seven sages. One of the sages, Agastya, curses Nahusha to turn into a snake, and Indra again becomes king of heaven. 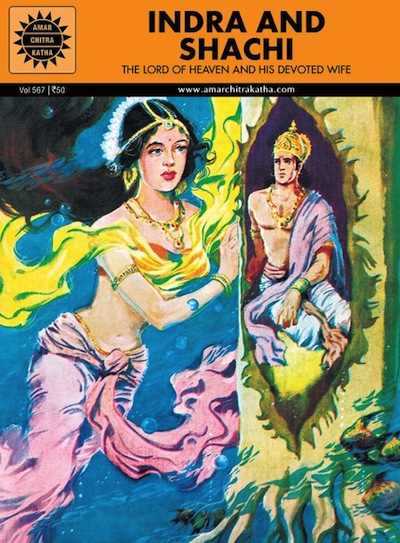