This is a guide to Rama: Retold from the Ramayana (Volume 504). You can find it at Amazon. 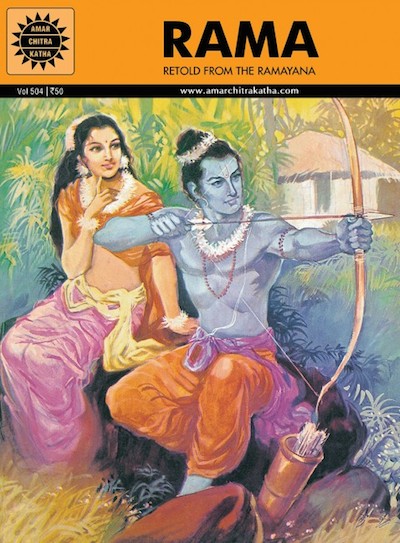 Young Rama (pp. 1-6). The story starts in the city of Ayodhya on the Sarayu River where Dasharatha is king. His sons are Rama, son of Queen Kaushalya; Bharata, son of Queen Kaikeyi; and Lakshmana and Shatrugha, sons of Queen Sumitra. Already a skilled archer as a young boy, Rama helps the sage Vishvamitra to kill the demoness Tataka. Vishwamitra then takes Rama and his brother Lakshmana to the court of King Janaka of Mithila. To win Janaka's daughter Sita in marriage, Rama not only lifted but snapped a mighty bow. Rama's father, King Dasharatha, comes to Mithila for the wedding of Rama and Sita.


Additional reading: The sage Vishvamitra was originally a king and only later became a sage. You can read his story in this comic book: Vishvamitra: The King Who Became an Ascetic.

Rama's Exile (pp. 7-12). King Dasharatha decides to make Rama his successor but Manthara, maid of Queen Kaikeyi, persuades Kaikeyi to demand that Dasharatha exile Rama and make Kaikeyi's son, Bharata, king instead. Because of a promise he once made to Kaikeyi, Dasharatha has to agree, although he is grief-stricken. Rama obeys his father's wishes without question, and Sita and Lakshmana join Rama in his exile. Bharata had been away from home during these events and when he returns, he learns that his father has died after sending Rama into exile. Bharata seeks Rama in the forest, hoping to persuade him to return to Ayodhya, but Rama insists on carrying out Dashratha's commands. Bharata takes Rama's sandals and puts them in place of Rama on the throne.


Additional reading: You can read the sad story of Dasharatha's last days in this comic book: Dasharatha: The Story of Rama's Father.

Shurpanakha (pp. 12-14). While Rama, Sita, and Lakshmana are living in the forest, a beautiful woman, Shurpanakha, sees Rama and falls in love with him. Rama explains that he is married and refers her to Lakshmana, while Lakshmana jokingly sends her back to Rama. Furious, Shurpanakha reveals her true form: she is a demoness. Lakshmana cuts off her nose and ears, and she runs screaming to her cousins, Khara and Dooshana, for help. Khara leads a demon army to attack Rama and Lakshmana, but Rama defeats the demons and kills both Khara and Dooshana. Shurpanakha goes to her brother, Ravana, the ten-headed king of the demons, and tells him what happened.


Additional reading: For more about Ravana and his family, see this comic book: The Lord of Lanka: The Rise and Fall of a Demon King.

Ravana (pp. 15-18). Ravana summons his uncle, the demon Maricha, and tells him to take the form of a golden deer. Sita urges Rama to catch the deer for her. Rama chases the deer, who cries out in Rama's voice to Lakshmana. Sita forces Lakshmana to go after Rama, and when she is alone, a sanyasi approaches her, begging for food, but it is Ravana in disguise. He grabs her and takes her away in his chariot. The vulture Jatayu tries to stop Ravana, but Ravana is too strong. Rama and Lakshmana return to find Sita gone; Jatayu tells them that Ravana took her and went south before he dies.


Additional reading: The word "sanyasi" refers to someone who has renounced the material world and is living the life of an ascetic. You can find out more about the stage of life called sannyasa in this Wikipedia article. As that article explains, the literal meaning of the word "sannyasa" is to "put everything down," i.e. renunciation, to set aside the material world.

Rama and the Monkeys (pp. 18-22). Heading south, Rama and Lakshmana meet Sugriva, brother Vali, king of the monkeys, and his friend Hanuman. They help Sugriva defeat Vali, and Sugriva becomes king. Rama gives Hanuman his ring and sends her in search of Sita. Hanuman and the monkeys go to the southern tip of India, and then Hanuman leaps to Lanka. He finds Sita there, being held prisoner. He gives her the ring and promises to take news of her to Rama. He fights with the demons and even kills Ravana's son, Akshaya Kumar. Ravana sends his son Meghanada to capture Hanuman. Meghanada brings Hanuman before Ravana, and Ravana sets Hanuman's tail on fire. Hanuman grows to a gigantic size, which allows him to set all of Lanka on fire. Hanuman then returns to Rama with news of Sita.


Additional reading: Meghanada is better know as Indrajit, the "Conqueror-of-Indra," because when Ravana attacked the gods in their heaven, Indrajit defeated Indra. You can read more about Indrajit (Meghanada) at Wikipedia; Meghanada is the Sanskrit form of the name, while Meghnad is a modern version (much like Rama is Ram, Lakshmana is Lakshman, etc.). There is also an article at Wikipedia about Akshayakumara, who was Ravana's youngest son.

Vibhishana (pp. 23-25). Rama leads his army of monkeys and bears to Lanka. Ravana's virtuous brother Vibhishana urges him to return Sita to Rama, but this infuriates Ravana. Vibhishana then goes over to Rama's side, and Rama accepts him as an ally. The monkeys build a bridge across the sea, and Rama then sends Vali's son Angada as an ambassador to Ravana, offering peace in exchange for Sita. Ravana refuses the peace offer.


Additional reading: There is also a detailed article at Wikipedia about Vibhishana, along with a great article about Rama's bridge to Lanka.

The War (pp. 25-28). Meghanada wounds Lakshmana, and Hanuman brings the physician Sushena... and he brings Sushena's house too! Sushena says he needs the sanjeevani herb which grows on a far-away hill, so Hanuman flies away and brings back the hill itself so that Sushena can revive Lakshmana. Ravana's brother Kumbhakarna slaughters many of the monkeys before Rama is able to kill him, and then Lakshmana kills Meghanada. When Ravana hears his son is dead, he goes into battle himself.


Additional reading: You can read more about Hanuman and the Medicine Hill in this comic book: Hanuman to the Rescue: Hanuman Brings the Sanjeevani.

Rama's Victory (pp. 28-32). Ravana uses all twenty of his arms to attack Rama and Lakshmana, while Rama rides out to challenge him in a chariot given to him by the god Indra. Ravana then uses his magical powers to conjure up more Ravanas. Rama slices off one head after another with his arrows, but Ravana keeps on fighting. Finally Vibhishana reveals that Ravana's nectar of life is in his navel, so Rama is able to kill Ravana by shooting an arrow into his navel. Rama makes Vibhishana king of Lanka, and he returns to Ayodhya with Sita, traveling in Pushpaka, the flying chariot, where he crowned king at last.


Additional reading: There is a detailed article at Wikipedia about the Pushpaka Vimana. For the story of how Ravana came into the possession of the Pushpaka, see this comic book:  Kubera: The Lord of Wealth.