This is a guide to Hanuman: The Epitome of Devotion and Courage (Volume 502). You can find it at Amazon. 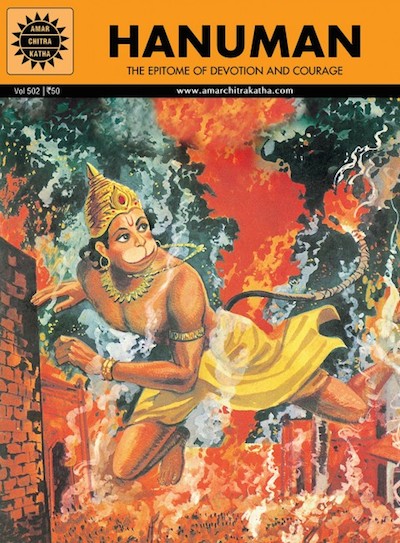 Hanuman and Rama (pp. 1-3). When he was little Hanuman grabbed at the sun, thinking it was a fruit to eat. He got stronger as he grew, and saved Sugriva from a wild elephant. When Sugriva had to flee his brother Vali by going into exile in the wilderness, Hanuman joined him. It was in the wilderness that Hanuman first met Rama and his brother Lakshmana; not sure who they were, Hanuman disguised himself as an ascetic. Overwhelmed by love for Rama, Hanuman then revealed who he was and carried Rama and Lakshmana on his shoulders to meet with Sugriva.


Additional reading: The usual version of the story is that Hanuman thought the sun was a mango; more about Hanuman's childhood at Wikipedia. Pavana is another name for Vayu, the god of wind. You can read more about Sugriva and his brother Vali at Wikipedia, and there is also an article about the vanaras, often translated "monkeys" in English.

Sugriva and Vali (pp. 4-6). Sugriva tells Rama about how he had trapped his brother Vali in a cave, thinking he was dead, and how Vali emerged from the cave, furious to discover that Sugriva had taken the throne in Vali's absence. Rama agrees to help Vali defeat his brother. Sugriva then shows Rama the jewels that fell from the sky; Rama recognizes them as belonging to his wife Sita, who has been kidnapped by Ravana, king of the rakshasas. Sugriva duels with Vali, but Rama cannot tell who is who. The next time they fight, Sugriva wears a garland and this allows Rama to recognize Vali and kill him. Sugriva becomes king again, and Vali's son Angada is made crown prince.


Additional reading: You can read all about the conflict between Vali and Sugriva in this comic: Vali: The Downfall of an Arrogant King.

Leap to Lanka (pp. 4-9). Sugriva then sends Hanuman and the other monkeys to search for Sita. When Hanuman, Angada, and Jambavan, king of the bears, reach the southern shore, Sampati the vulture king tells them Sita is in Lanka. Hanuman leaps all the way to Lanka. Along the way he rests on Mount Mainaka, who is a friend of Hanuman's father, and he also battles with the monster Surasa.


Additional reading: There are some wonderful illustrations of this episode in the Wikipedia article about the monster Surasa. Valmiki's Ramayana tells the story of Mount Mainaka in detail: Mount Mainaka was hiding under the water to escape from the god Indra who wanted to cut off the wings of all the mountains; Vayu, Hanuman's father had rescued the mountain by blowing it into the ocean. After Mainaka helped Hanuman, Indra was so impressed that he then came to see the mountain and promised not to cut off Mainaka's wings, so Mainaka is the only winged mountain left in the world.

Hanuman and Sita (pp. 10-13). Hanuman looks everywhere in Lanka for Sita. He sees Ravana's many wives in the palace, and he sees Ravana himself. At first the thinks Mandodari, Ravana's wife, might be Sita, but he realizes Sita would never give herself to Ravana. Finally he finds Sita in the ashoka garden. Hanuman hides and listens as Ravana tries to seduce Sita. He then hears the rakshasis teasing Sita. When Sita is alone at last, Hanuman goes to her and gives her Rama's ring. He offers to take Sita away, but Sita decides to stay so that Rama will come and defeat Ravana once and for all.


Additional reading: What the comic book does not explain was that Ravana could not force Sita because of a curse resulting from his rape of the apsara Rambha; you can read more about Rambha at Wikipedia.

Fire in Lanka (pp. 13-17). Hanuman then starts uprooting the trees and attacking the rakshasas, who are terrified of him. Indrajit, Ravana's son, then used his snake-arrows to capture Hanuman. Ravana wants to execute Hanuman, but his virtuous brother Vibhishana urges him to treat Rama's messenger with respect. Ravana decides to set Hanuman's tail on fire, but Hanuman's tail grows so large that they run out of oil. When they set the fail on fire, Hanuman runs through the streets and sets all of Lanka on fire, and then plunges his tail in the ocean before leaping back to India.


Additional reading: Indrajit's weapon is called a nagastra or a nagapasha in Sanskrit; you can read more about this weapons and other supernatural weapons in the Astras article at Wikipedia, and there is also a detailed article about Indrajit.

March to Lanka (pp. 17-21). When Hanuman returns, Rama raises an army of monkeys and bears to march on Lanka. The monkey engineer Nala builds a bridge so that they can cross the ocean. Ravana's brother Vibhishana decides to ally himself with Rama. On the way to Lanka, Hanuman carries Rama on his shoulders and Angada carries Lakshmana.


Additional reading: There is a fascinating article about the Rama Setu, or Rama's Bridge, at Wikipedia. The title of the article is Adam's Bridge because of an Islamic tradition that associates Sri Lanka with Adam (see the article Adam's Peak), so when a British mapmaker drew the bridge on a map in 1804, he used the name "Adam's Bridge."

The Battle Rages (pp. 22-24). When Hanuman and Vibhishana capture some rakshasa spies, Rama sends them back to Ravana to warn him. Ravana is not afraid, and vows to destroy Rama and all his allies. The rakshasa general Jambumali fights with Hanuman, but Hanuman smashes his chariot and lifts up Rama and Lakshmana so they can rain down arrows on their enemies. Hanuman slays the rakshasa general Dhumraksha, and he crushes the giant Akampana with a tree.


Additional reading: According to some versions of the story, Dhumraksha and Akampana were both sons of Sumali, Ravana's grandfather. You can find out more about Sumali and the history of Ravana's family in this comic book: Kubera, The Lord of Wealth.

Hanuman and the Mountain (pp. 24-27). Using his power of invisibility, Indrajit manages to shoot Lakshmana. The physician Sushena says he needs the sanjeevani plant to heal Lakshmana, so Hanuman flies to Mount Gandhamandan to look for the plant; unable to find the plant, he brings the whole mountain back with him. The plant cures Lakshmana and brings thousands of monkeys back to life.


Additional reading: You can read all about this episode in a different comic book: Hanuman to the Rescue: Hanuman Brings the Sanjeevani.

Victory for Rama (pp. 27-32). With Hanuman's help, Rama destroys Ravana's chariot, but he lets Ravana go rather than kill an unarmed enemy. In desperation, Ravana decides to wake up his brother Kumbhakarna. Although Kumbhakarna is a fierce warrior, Rama defeats him. Meanwhile, Lakshmana interrupted Indrajit during a prayer that would have made him invincible, killing him with an arrow. Ravana rides out on the battlefield again, and Rama finally defeats him. Vibhishana becomes king, Rama and Sita are reunited, and Hanuman takes the news of victory to Ayodhya, announcing Rama's return. When Rama sends all his other allies back home, Hanuman will not leave, vowing to stay with Rama forever.


Additional reading: You can read more about the defeat of Kumbhakarna in this comic book: Kumbhakarna: The Sleeping
Giant. Hanuman's absolute devotion to Rama and Sita is often represented in visual form by having Hanuman open up his heart to show that Rama and Sita are there inside, as you can see in these images of Hanuman.