This is a guide to Dasharatha: The Story of Rama's Father (Volume 570). You can find it at Amazon. 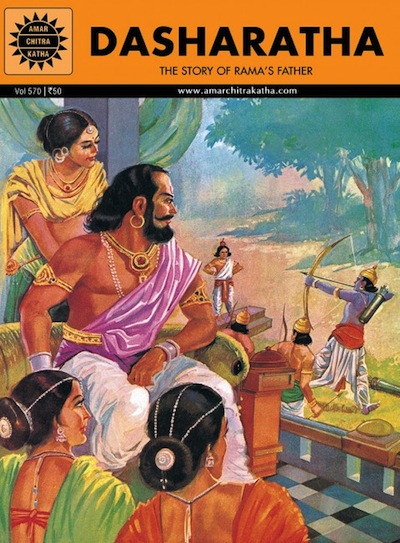 The Hunting Accident (pp. 1-4). The young Dasharatha accidentally kills a young boy while hunting in the dark and must tell the boy's old, blind parents what happened. The old man curses Dasharatha: "Your son too shall be parted from you, and you shall die grieving for him."


Additional reading: In other accounts this boy is named Shravan; you can learn more at Wikipedia.

Queen Kaikeyi (pp. 4-8). Dasharatha also married three women: Kaushalya, Kaikeyi (promising Kaikeyi's father Ashwapati that her son would be heir to the throne), and Sumitra, but none of them bore him a son. The god Indra had sought Dasharatha's help in the war between the gods (devas) and demons (asuras), and Kaikeyi rode with Dasharatha when he went to help Indra battle the asura Shambara. She saved his life on the battlefield, and he granted her two wishes whenever she wanted them.


Additional reading: You can read more both about the god Indra and the asura Shambara at Wikipedia.

The Sons of Dasharatha (pp. 8-10). Dasharatha decides to perform a sacrifice to the gods so that they will grant him a son. A celestial being emerged from the sacrificial fire for payasa (rice pudding); he told Dasharatha that if his wives ate the payasa, they would have sons. Kaushalya gave birth to Rama, Kaikeyi to Bharata, and Sumitra to Lakshmana and Shatrughna. Rama was everyone's favorite; even Kaikeyi agreed that Rama would be the best king to rule after Dasharatha, although there was a rivalry between Kaushalya and Kaikeyi.


Additional reading: Another name for this rice pudding, called payasa in the comic book, is kheer. You can read more about it at Wikipedia.

Vishvamitra (pp. 11-15). Vishvamitra asks for Rama's help in doing battle with the rakshasas who disturb his sacrifices. Dasharatha reluctantly agrees to send Rama and Lakshmana. News then comes that Rama has won Sita, the daughter of King Janaka, as his bride, and Janaka offers his daughter Urmila as a bride for Lakshmana and his nieces as brides for Bharata and Shatrughna.


Additional reading: Vishvamitra is one of the most famous of the Indian sages, and he is involved in many adventures beyond the stories recounted in the Ramayana. You can read more about Vishvamitra at Wikipedia.

Dasharatha's Plans (pp. 15-19). Bharata's uncle, Yudhajit, has taken him to visit his grandfather, Ashwapati. Dasharatha decides to name Rama as "yuvarajah," or crown prince, the heir apparent. Rama is surprised that he will be made king while Bharata is away, but he agrees to his father's wishes. Kaikeyi's servant Manthara, eavesdropping, finds out what is happening and informs Kaikeyi.

Manthara and Kaikeyi (pp. 19-22). Kaikeyi is at first delighted to hear the news about Rama from Manthara, but Manthara then turns her heart against Rama, and she persuades Kaikeyi to ask for her two wishes from Dasharatha: to make Bharata king and to send Rama into exile.


Additional reading: In some versions of the story, Manthara has hated Rama ever since he was a small boy. You can read about that at Wikipedia.

Kaikeyi and Dasharatha (pp. 23-27). Despite Dasharatha's desperate protests, Kaikeyi insists that he honor his promise and grant her wish that Bharata be made king and Rama go into exile for fourteen years.


Additional reading: The place where Kaikeyi awaits Dasharatha is the kopa gruha (or kopa bhavan, kopa mandir), the "anger room."

Dasharatha's End (pp. 28-32). Rama learns of the change in plans and obeys without question, and departs into exile with Lakshmana and Sita. Dasharatha rejects Kaikeyi and spends his last days with Kaushalya. On the sixth night of Rama's exile, he remembers the old curse and dies. Bharata, however, will not rule in Rama's stead; he refuses to be crowned king and places Rama's sandals on the throne.


Additional reading: The Sanskrit term for these slippers or sandals is paduka; you can read more at Wikipedia.