This is a guide to Shiva Parvati: A Story of Divine Love (Volume 506). You can find it at Amazon.

Summary: The story begins after the death of Shiva's first consort, Sati. She is reborn as Parvati, daughter of the mountain king Himavat and the apsara Menaka. Narada tells Himavat that Parvati is destined to be Shiva's next consort, and he sends Parvati to attend Shiva in his meditations.

Meanwhile, Taraka is terrorizing the gods, and Brahma foresees that the son of Shiva and Parvati will be the one who defeats Taraka. Kama, god of love, and his wife Rati go to see Shiva and make him fall in love. Kama strikes Shiva with one of his arrows, and Shiva angrily burns him to ashes. The gods tell Rati that Kama will be restored to her on Shiva and Parvati's wedding day.

Parvati then practices austerities to try to win Shiva's love on her own. A wandering hermit seeks to persuade Parvati to abandon her quest, but she is steadfast, and this hermit turns out to be Shiva in disguise, testing her. They marry, and Shiva restores Kama to Rati. Together they raise the six-faced god Kartikeya, who grows up to defeat Taraka and restore peace to the gods in heaven. 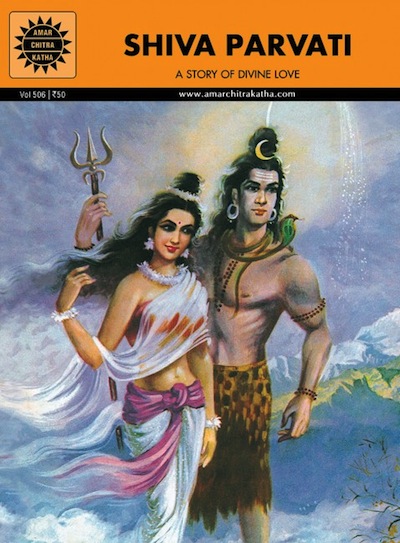