This is a guide to Konark: Temple to the Sun (Volume 833). You can find it at Amazon.

You can read more about the Konark Sun Temple at Wikipedia. The comic book begins with the builder of the temple, King Narasimha, who ruled in Odisha (in eastern India) during the 13th century. You will read about the everyday wisdom of an old woman that was crucial to building the temple, and you will also read a story about the architect of the temple and his young son. There are also stories about the sun-god Surya, of course, like the story of his wife Sanjana and her shadow-self, Chhaya, and also the birth of the horse-lords, the Ashwins, twin sons of Surya. There is the story of a former temple, built on the same spot by Samba, son of Krishna and his wife Jambavati, daughter of the bear-king Jambavan; in that story you will learn about the Syamantaka gem. When Samba insults the great sage Narada, a disaster ensues: Samba grows ill, and must do penance to the sun-god for a cure. Finally, there is a story about King Narasimha's love of elephants, and his elephant Sudehi in particular, which is why there are so many elephant carvings in the Konark Sun Temple. In the end, crownstone to the temple is secured thanks to the architect's young son, who is willing to make a supreme sacrifice for his father in the end. 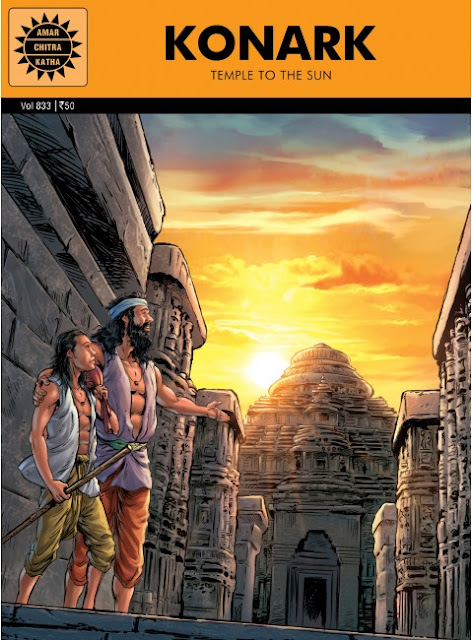