This is a guide to Thanjavur: City of Brihadeeswara (Volume 836). You can find it at Amazon.

Summary: Thanjavur in Tamil Nadu is the site of the Brihadeeswara Temple. Legends tell of a wicked asura in ancient times named Thanjan. Vishnu defeats Thanjan, and the site of that battles becomes the prosperous city of Thanjavur. In the 9th century, it becomes capital of the Chola kings. The great Chola king Raja Raja (king of kings) leads his people to victory over neighboring kingdoms, and he then dedicates him to worshiping Shiva, and Shiva and Parvati intervene miraculously in the making of a statue of Shiva Nataraja, Lord of the Dance. The king then goes on a quest to recover the hymns of Shiva stored in a temple at Chidambaram, and he receives Shiva's approval to recover some of the hymns.

When the king falls ill, he vows to build an enormous temple to Shiva, with beautiful carvings in the stones, and a statue of Nandi in which a toad was trapped; when the stonecarver sets the toad free, it goes to live in the sacred pond. The builders complete the Brihadeeswara Temple in the year 1010.

A fresco in the temple depicts Shiva as Shiva Tripurantaka. That story goes like this: with a boon from Brahma, three asura brothers built three cities of gold, silver, and iron which can be destroyed only by a single arrow. Shiva vows to accomplish this feat using Vishnu himself as the arrow. Another fresco tells of Sundarar, a follower of Shiva: Sundarar was the adopted son of a king who later finds out that he is a slave, but it turns out that his new master is Shiva, who wants Sundarar to compose hymns for him. As punishment for marrying two different women, Sundarar loses his sight, but he continues to worship Shiva, who then restores his sight. When Sundarar's life is over, Shiva brings him to Mount Kailash. The great king's son expanded the Chola Empire even further, and he too built great monuments. See the notes on the back page for more historical context and details.

The Chola dynasty lasted until 1279. You can read more at Wikipedia: The Chola Dynasty and Great Living Chola Temples, including the Brihadeeswarar Temple. 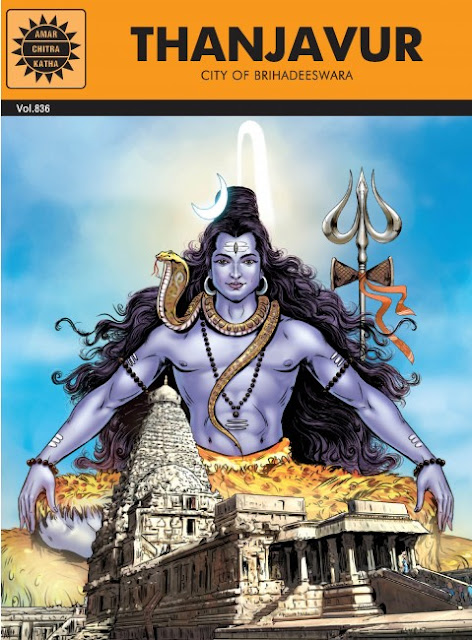