This is a guide to Sati and Shiva: Perfection Rewarded (Volume 550). You can find it at Amazon.

Summary: The goddess Uma was born on earth as Sati, daughter of Daksha, to become Shiva's wife. Shiva is so impressed by her devotional practices that he agrees to marry her. Daksha is not happy with her choice, and he scorns Shiva, refusing to invite the married couple to his great sacrifice, but Sati goes anyway, riding on Nandi. Daksha continues to insult Shiva, and in her shame Sati decides to die so that she can be reborn as the daughter of a more worthy father. She casts herself into the fire and dies. A huge fight breaks out between Shiva's attendants and demons loyal to Daksha, and Shiva's attendants retreat to Mount Kailash.

When Shiva hears what happened, he pulls out a clump of his hair and generates Virabhadra and Mahakali, and then he sends them to attack Daksha. Another huge fight breaks out, with Indra helping to defend Daksha from Virabhadra and Mahakali. Vishnu also attacks Virabhadra, but cannot stop him, and Virabhadra finally tears off Daksha's head and throws it into the sacrificial fire. Vishnu and Brahma persuade Shiva to revive Daksha to complete the sacrifice, but he will have the head of a goat.

Sati, meanwhile, will be reborn as Parvati so that she can again be Shiva's consort. You can read about Shiva and Parvati here: Shiva Parvati: A Story of Divine Love. 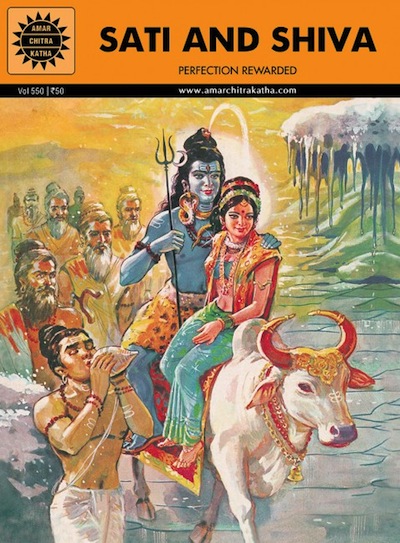