Guide: The Churning of the Ocean

This is a guide to The Churning of the Ocean (Volume 538). You can find it at Amazon.

Summary: The sage Durvasa receives a fragrant garland from an apsara; he gives it to Indra, and Airavata flings it on the ground. Durvasa is angry and curses Indra; the gods and all the natural world begin to grow weak, and the asuras are able to defeat them in battle. Vishnu urges them to make peace with the asuras, and then to churn the amrita nectar from the ocean with the asuras' help, but to keep all the nectar for themselves. The gods go to Bali, lord of the asuras, to make peace, and they persuade the asuras to help them churn the Ocean of Milk. With the help of Vishnu and Garuda, they use Mount Mandara as the churning rod, and they use Vasuki as the churning rope, with Vishnu's avatar, Kurma the tortoise, as the base on which the mountain sits. The asuras are holding Vasuki's head, and the smoking fumes from his mouths choke them. Then the poisonous Halahala emerges from the ocean, but Shiva drinks it up, which turns his throat blue. All kinds of marvelous creatures emerge from the churning, and finally Shri emerges, captivating all the gods and asuras, and she chooses Vishnu as her consort. Finally, Dhanvantari emerges from the ocean, carrying the nectar, and the asuras grab it. Vishnu takes the form of Mohini, a beautiful woman, and the asuras want her to distribute the nectar. She gives nectar to the gods, just smiling at the asuras, but the asura Rahu becomes suspicious; he sneaks into the group of gods and begins to drink the nectar, but Vishnu cuts off Rahu's head just as he begins to swallow the nectar, and Rahu's head shoots off into the sky. The asuras realize the gods have tricked them, and a fight breaks out. Vishnu uses his Sudarshana Chakra to kill thousands of asuras, and the asuras hurl mountains at the gods. In the end, the gods defeat the asuras and return to their heavenly home. 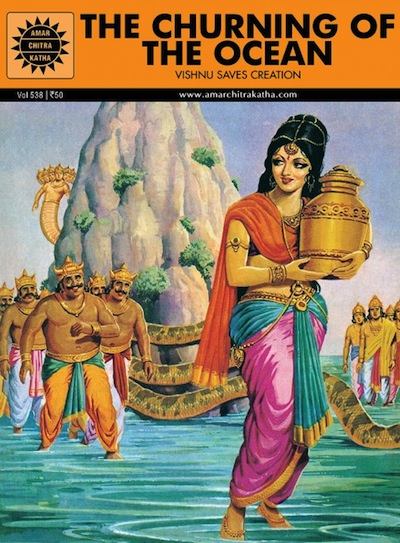