This is a guide to Subhadra: Beloved Sister of Krishna and Balarama (Volume 758). You can find it at Amazon. 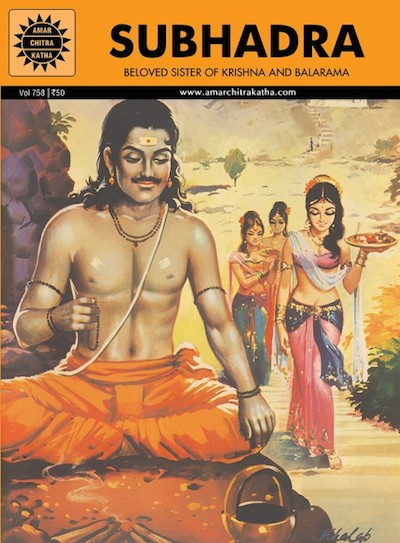 The Pandavas and Draupadi (pp. 1-7). Subhadra is the sister of Krishna and Balarama. Balarama teaches the art of using a mace in battle, and Duryodhana, the eldest of the one hundred Kaurava brothers, is his favorite pupil; he hopes that Subhadra will marry him. Later, Duryodhana's cousin, Yudhishthira, the eldest of the five Pandava brothers, is named heir apparent, and Duryodhana tries to kill Yudhishthira and his four brothers. They escape, and later Yudhishthira's brother Arjuna wins Draupadi as his bride at a swayamvara. Without knowing what Arjuna won, Pandavas' mother, however, tells them that whatever he has won must be shared, and so Draupadi becomes the wife of all five brothers. The brothers decide that when one brother is with Draupadi, the others must respect their privacy; to break this rule means twelve years of exile. When Arjuna has to go fetch his weapons in a room where Draupadi and Yudhishthira are staying, he agrees to the punishment of exile and embarks on a pilgrimage.


Additional reading: You can read more about Arjuna's  in this article at Wikipedia: Arjuna's Tirtha-yatra, and you can also find out more about Balarama and about Subhadra.

Arjuna and Subhadra (pp. 8-16). Arjuna visits the holy places, and finds himself near Dwaraka, where he hears people talking about Subhadra's betrothal to Duryodhana. He vows that he will win her instead. He disguises himself as a sanyasi (a holy man), and thus enters Dwaraka. Balarama realizes this is no ordinary sanyasi, but he does not recognize Arjuna. Balarama invites the sanyasi to the palace, where Krishna does recognize him. In private, Arjuna tells Krishna why he is there. He then sees Subhadra for the first time and is struck by her beauty; she also falls in love with the mysterious sanyasi at first sight. Krishna suggests that Arjuna run away with her; an elopement is proper for a kshatriya (royal warrior). When Arjuna overhears that Subhadra prefers the sanyasi to Duryodhana, he seeks Yudhishthira's permission and then proceeds with Krishna's plan.


Additional reading: You can read more about the holy men of India at Wikipedia: Sannyasa. There is also an article about the swayamvara ritual and about the kshatriya varna.

The Elopment (pp. 17-26). Arjuna rides up in Krishna's chariot and grabs Subhadra when she is on her way home from the temple. The warriors of Dwaraka are called into action and assemble in the court room. They are ready to ride in pursuit of the sanyasi, but Balarama tells them they must ask Krishna's advice first. Krishna then reveals the sanyasi's true identity, and he also explains that Subhadra is in love with Arjuna and prefers him to Duryodhana. Krishna urges them to send a party in pursuit to congratulate the couple and bring them back peacefully.


Additional reading: You can also find out more about Krishna here: Wikipedia: Krishna. In some folktales and other more modern variations on the story, it is Subhadra instead who kidnaps Arjuna and drives the chariot; see Wikipedia: Alternate Story.

Subhadra in Indraprastha (pp. 27-32). The search party find Arjuna and Subhadra resting beneath a tree. Balarama tells Arjuna to come back and marry Subhadra in Dwaraka. When Arjuna's years of exile are over, he wants to return to Indraprastha (the Pandavas' royal city) together with Subhadra, but she fears Draupadi will not accept her, and her fears prove true: Draupadi is not happy about Arjuna's Yadava wife (the Yadavas are Krishna's clan). Arjuna presents Subhadra to his mother, Kunti, and she tells him to take Subhadra to meet Draupadi. Subhadra bows before Draupadi and salutes her as her elder sister. Draupadi relents and embraces Subhadra, caling her sister and speaking kindly.


Additional reading: Notice that you can see Arjuna and Subhadra playing a dice game which you might know as parcheesi. The word "parcheesi" is a borrowing from Hindi; you can read more about the word and the game here: Parcheesi. Subhadra and Arjuna go on to have a son, Abhimanyu; you can read about him in this comic book: Abhimanyu, Star-Crossed Prince.