This is a guide to Krishna and Jarasandha: Krishna Outsmarts His Fierce Adversary (Volume 518). You can find it at Amazon. 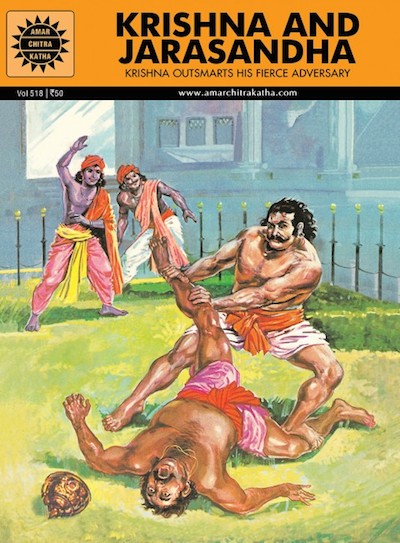 Birth of Jarasandha (pp. 1-4). King Brihadratha of Magadha has no son, but the sage Chandakaushika gives him a mango to give to his wife in order to get a son. Brihadratha has two wives, so he divides the mango between them. Each wife then gives birth to half a son! They cast the half-infants away in the forest, where the rakshasi Jara finds them. She plans to carry them away and eat them, and to make them easier to carry, she ties the half-boys in a bundle. The halves unite to form a child. The king hears him crying and Jara gives him the baby; he names the baby Jarasandha (Jara-joined) in her honor.


Additional reading: A rakshasi is a female rakshasa; you can find out more about these creatures at Wikipedia: Rakshasa.

Jarasandha and Krishna (pp. 5-10). Chandakaushika predicts Jarasandha will be a mighty king, and the prophecy comes true. King Jarasandha marries his daughters to Kamsa, king of Mathura. Kamsa, meanwhile, fears the prophecy that his nephew Krishna will kill him, so he attempts to kill Krishna, but Krishna kills Kamsa instead. Jarasandha's daughters are now widows, and he vows revenge. When Jarasandha attacks Mathura, Krishna and his brother Balarama defend the city with weapons that arrive in celestial chariots. They defeat Jarasandha in battle, but spare his life. Jarasanda launches seventeen more attacks, and each time he is defeated.


Additional reading: You can find out more about the evil Kamsa at Wikipedia: Kamsa.

King Kalayavana (pp. 10-15). When another king, Kalayavana, boast of his great power, the sage Narada tells him that Krishna and Balarama are the greatest warriors on earth. Kalayavana then mounts an attack. Unable to defend against both kings at once, Krishna causes the city of Dwaraka to rise up from the waters of the western sea, and then with his supernatural powers he relocates the people, cattle and wealth of Mathura to the city of Dwaraka. Krishna, Balarama and a small army remain in Mathura to confront the attackers. In his divine form, Krishna leads Kalayavana away into the cave where the sage Muchukunda lives. Kalayavana kicks the sleeping sage, thinking he is Krishna, and then Muchukunda burns Kalayavana to ashes with the power of his gaze.


Additional reading: You can find out more about Kalayavana and the
Yavanas at Wikipedia. There is also an article about the sage Muchukunda.


Additional reading: For more about the city of Dwaraka, see Wikipedia: Dwaraka.


Additional reading: For more about Yudhishthira and the Pandavas, see Wikipedia, and there are detailed articles about Bhima and about Arjuna. There is also an article about the rajasuya.

Bhima and Jarasandha (pp. 22-31). Krishna, Bhima, and Arjuna disguise themselves as brahmins. Jarasandha suspects they are not really brahmins, but he agrees to grant their petition. Krishna asks for him to fight one of them in single combat, revealing their identities. Jarasandha decides Bhima is the most worthy opponent, and they duel with maces. After they break their maces, they wrestle for twenty-seven days. Krishna decides to reveal the secret of Jarasandha's birth so that Bhima can defeat him at last. Bhima then kills Jarasandha by ripping him in two. Krishna installs Jarasandha's son on the throne, and Yudhishthira's rajasuya sacrifice can proceed.


Additional reading: The mace is Bhima's weapon of choice. For more about the mace as a weapon, see Wikipedia: Mace, which has a special section on maces in India, along with a separate article on the Gada, which is the Sanskrit word for a mace or club.