This is a guide to Drona: Valiant Archer, Supreme Teacher (Volume 565). You can find it at Amazon. 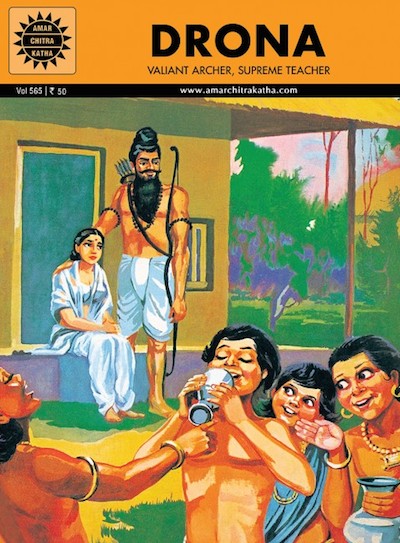 Drona and Drupada (pp. 1-4). Drona means "pot," and this son of the sage Bharadwaja was born in a pot. Bharadwaja is friends with the king of Panchala, and so Drona becomes the playmate of the king's son, Drupada. Drona then goes to study with the rishi Agnivesha, as does Drupada. Drupada promises that when he becomes king of Panchala, Drona can make his home in the palace.


Additional reading: The comic book does not provide the details of Drona's birth, but you can find out more at Wikipedia: when Bharadwaja was performing ablutions, he saw a beautiful apsara and ejaculated; he gathered the fluid in a pot, and Drona grew inside that pot. The sloka (verse) that Drona recites while Drupada washes their clothes is the "Ishavasyamidam" which goes like this:

Know all that moves in this moving world as enveloped by god, and find enjoyment through renunciation, not through greed of possession (translation by Rabindranath Tagore).

Drona Vow Revenge (pp. 5-9). After their studies end, Drupada does become king while Drona lives in an ashram. He marries Kripi and they have a son, Aswatthaman, whom they adore. Drona hears that the great sage Parashurama is giving away his wealth, so he goes to ask for a share, and Parashurama gives him his weapons, powered by mantras. Meanwhile, Aswatthama asks one of his friends for a taste of milk; the boys trick him with powdered rice in water and mock his poverty. Drona decides to go to Drupada for help, but Drupada spurns him. Drona vows revenge.


Additional reading: You can read more about Parashurama (Axe-Rama) who, like Drona, is a brahmin with great military skills, here at Wikipedia: Parashurama.

Drona and the princes (pp. 10-14). Next they go to Kripa, Kripi's brother and a guru to the Pandava and Kaurava princes. He takes them in and promises to keep Drona's military skills a secret. One day, the princes are playing ball and lose the ball in a well. Drona retrieves the ball with blades of grass, and the princes are amazed. They tell their great-uncle Bhishma, who realizes this must be Drona. Drona explains that he seeks pupils who will eventually help him get his revenge on Drupada, and Bhishma is glad to have him teach the princes. Drona explains what they must do for him after they complete their studies, and Arjuna agrees most eagerly. He became Drona's best and favorite pupil.


Additional reading: You can read more about both Bhishma and Kripa at Wikipedia.

Ekalavya (pp. 15-17). Ekalavya, a prince of the Nishada people, asks to become Drona's pupil. Drona refuses because he is a Nishada and also because he fears Ekalavya might excel Arjuna. Ekalavya goes into the forest, makes a statue of Drona, and practices in its presence. When the princes see Ekalavya's archery skills in action, he tells them Drona is his teacher. Drona then demands his guru fee: the thumb of Ekalavya's right hand. Ekalavya complies, and thus he could not become an archer to rival Arjuna.


Additional reading: The Nishadas were forest dwellers who did not belong to the caste system; you can read more at Wikipedia: Nishada kingdom, and you can also read more about Ekalavya and the terrible guru dakshina (guru fee) that Drona demands from him at Wikipedia: Ekalavya. Dronacharya is a contraction of "Drona Acharya," and an acharya is a scholar or teacher.

King Drona (pp. 18-24). When the princes finish their studies, Drona demands a fee from them also: to attack Panchala and capture King Drupada. Arjuna and his brothers let their cousins, the Kaurava princes, lead the attack, but they flee when Drupada counterattacks. Arjuna then leads his brothers in an attack, and he captures Drupada. Drona then tells Drupada that Panchala belongs to him, but he gives half back to Drupada, asking again for his friendship now that they are both kings. Drupada agrees but he secretly longs for revenge.


Additional reading: You can find out more about the ancient kingdom of Panchala at Wikipedia: Panchala.

Drupada's Revenge (pp. 25-29). Drupada now wants to have a son who will kill Drona for him. Out of the sacrificial fire emerges a young prince and also a beautiful princess, Dhrishtadyumna and Draupadi. Draupadi becomes the wife of all five Pandavas who eventually go to war with their cousins, who are led by Duryodhana. Drona fights in Duryodhana's army, while Drupada and Dhrishtadyumna ally themselves with the Pandavas. As general of Duryodhana's army, Drona fights fiercely, and Drona kills Drupada in battle.


Additional reading: You can read more about both Draupadi and Dhrishtadyumna at Wikipedia.


Additional reading: For more about the terrible vengeance that Aswatthaman then seeks after his father's death, see Wikipedia: Aswatthaman.