This is a guide to Tales of Yudhishthira: Justice for the Pandava (Volume 703). You can find it at Amazon. 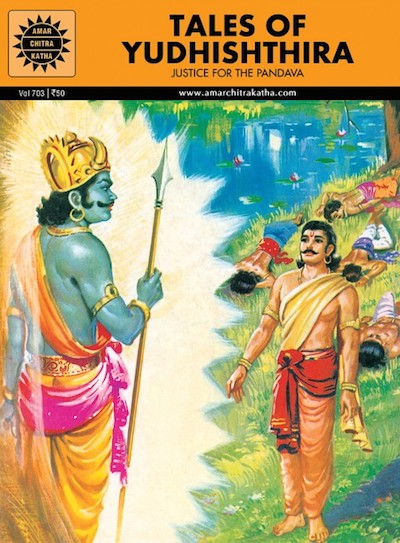 The Pandavas in the forest (pp. 1-6). A brahmin priest would use shami sticks to light the fire for a sacrifice, or yagna, and then hang them from a tree. One day the sticks get entangled in the horns of a deer, and the brahmin chases the deer into the woods, but the deer gets away. The brahmin goes to the Pandavas, living in exile in the forest, for help. Yudhishthira and his brothers promise to help. They chase the deer, but it vanishes. Now thirsty, they look for water.


Additional reading: You can read about shami wood at Wikipedia, and also about the yagna sacrifice with its ritual fire.

The voice in the lake (pp. 7-11). Nakula reaches the lake first, and the lake says that he must answer some questions before drinking. Nakula cannot see who spoke the words, so he ignores them and drinks, and he dies. Sahadeva arrives next; he thinks Nakula must have died of thirst before he got to the water, so he ignores the voices drinks, and he also dies. Then Arjuna comes, finds both bodies, and when the voice of the lake speaks, Arjuna gets angry, takes a drink, and he also dies. Bhima arrives, suspects it is the work of a rakshasa or yaksha, and he too ignores the voice and dies. When Yudhishthira arrives at last, he sees all four brothers dead.


Additional reading: Remember that Nakula and Sahadeva are the sons of Madri, while Arjuna, Bhima, and Yudhishthira are the sons of Kunti. You can also read about rakshasas and yakshas at Wikipedia.

Yudhishthira and the yaksha (pp. 12-15). The voice also speaks to Yudhishthira, saying, "I am the crane who owns this lake." Yudhishthira knows this cannot be a mere bird, and a yaksha then reveals himself. Yudhishthira agrees to answer the questions, which are riddles that test Yudhishthira's wisdom. When he answers them correctly, the yaksha offers to let him bring back one brother. Yudhishthira chooses Nakula, explaining that their father, King Pandu, had two wives, and it is only right for a son of Madri to also live (Yudhishthira is a son of Kunti). The yaksha is impressed and revives all four brothers.


Additional reading: The list of questions that Yudhishthira must answer is VERY long and really fascinating; you can see the entire scene in English here: Vana Parva 311.

Yudhishthira and Yama (pp. 16-17). The yaksha then reveals himself as the god Yama, also called Dharma, Yudhishthira's divine father. He returns the shami sticks to Yudhishthira, explaining that it was all a test. Since Yudhishthira passed the test, the god grants him one more wish. Yudhishthira asks to be devoted always to righteousness (Dharma), and the Pandavas then go back to where the brahmin awaits them, and they give back his shami sticks.


Additional reading: You can read about the god Yama at Wikipedia, and there is also an article about the principle of Dharma (truth, justice, righteousness — it is hard to translate with just one word in English). Yama is the lord of Dharma, and he is Yudhishthira's father in the sense that Kunti invoked the god Dharma with her mantra in order to give King Pandu a son; Yudhishthira was the first son that Kunti and Pandu had in this way.

The Pandavas depart (pp. 18-20). This story begins after the great war, as Yudhishthira mourns the many who died, but he agrees to be king, and the people are happy under his rule. The sage Narada informs him that his mother Kunti and his uncle Dhritarashtra along with his wife Gandhari have died. News also comes that Krishna, his brother Balarama, and all the Yadavas (Krishna's people) are dead. The Pandavas and Draupadi decide the time has come to leave this world. Yudhishthira places Parikshit (son of Abhimanyu, who was the son of Arjuna) on the throne, and they then leave Hastinapura, marching towards Mount Meru to seek heaven.


Additional reading: Mount Meru is the sacred center of the world in Hindu, Jain, and Buddhist cosmology, and this story of the journey to Mount Meru comes from the Mahaprasthanika Parva of the Mahabharata, the Book of the Great Journey (Maha-prasthanika).

The Pandavas fall (pp. 21-23). As they climb the mountain, they begin to fall, one by one: first Draupadi (because she loved Arjuna more than her other husbands), then Sahadeva (because he lacked humility), then Nakula (because he was proud of his good looks). Only Arjuna, Bhima, and Yudhishthira are left, along with a dog who has started to follow them. Arjuna then falls (he was proud of his bravery), and then Bhima (because he was greedy). Yudhishthira then sees a flying chariot approaching him and the dog, the only ones left.


Additional reading: The Sanskrit word for dog is "shvan," you can read more about the role of the dog in Hinduism at Wikipedia: Shvan.


Additional reading: You can read more about the god Indra at Wikipedia.


Additional reading: In Sanskrit, heaven is svarga, and the word for hell is naraka. There is also a word for the underworld in general: patala. This story comes from the book of the Mahabharata called Svargarohana, the Ascent to Heaven. You can see how the books of the Mahabharata are arranged in this useful table of contents at Wikipedia.

Return to heaven (pp. 30-31). At that moment, the gods appear and praise him, explaining that for their sins, they needed to experience hell, if just briefly. The god Yama explains that this was yet another test. Yudhishthira bathes in the celestial Ganga river and acquires a divine form. Indra and Yama take him to heaven, and this time he finds his brothers there.


Additional reading: For more about the idea of the celestial Ganga (as opposed to the earthly Ganges) and the goddess Ganga, see Wikipedia: Ganga.