This is a guide to Karna: Brave, Generous, Ill-Fated Prince (Volume 531). You can find it at Amazon.

See the detailed reading guide below. 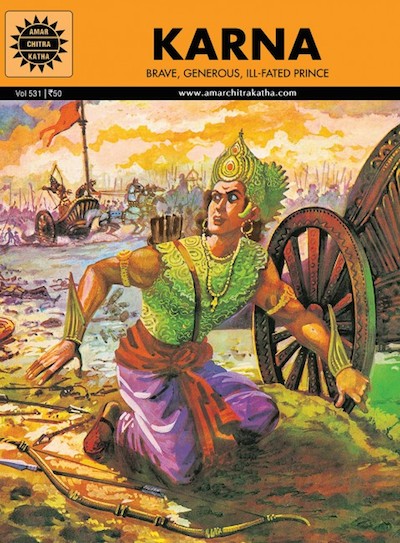 Kunti and Surya (pp. 1-3). King Kuntibhoja adopts his niece Pritha as his own daughter, giving her the name Kunti. When the sage Durvasa, renowned for his bad temper, stays with the king for a year, Kunti's gracious behavior impresses him and he gives her a mantra that allows her to invoke a god and bear that god's son. She tries out the mantra by calling on Surya, the sun-god, just out of curiosity to test the mantra. Kunti doesn't want a son, but the power of the mantra cannot be stopped, and she gives birth to a baby, Karna, who has kavacha (armor) and kundalas (earrings) from the Sun, his father.


Additional reading: The word "kundala" means "coil," and you can see the same root in the word kundalini, the energy "coil" in the spine according to yoga theory. You can read more about the irascible sage Durvasa at Wikipedia: Durvasa; it is Durvasa who is responsible for Lakshmana's death in the Ramayana: Durvasa, Rama, and Lakshmana.

The Young Karna (pp. 4-7). Kunti sets the baby adrift in a basket in the river and a charioteer named Adhiratha, finds him. He brings the baby home to his wife, Radha, and they call him Radheya, the son of Radha. Meanwhile, Kunti, now the co-wife of King Pandu along with his other wife, Madri, uses the mantra so that the childless Pandu can have sons. Kunti has three sons (Yudhishthira, Bhima, Arjuna), and Madri has twins (Nakula and Sahadeva). After Pandu dies, Madri casts herself on his funeral pyre, and Kunti is left to raise all five boys. The sons of Pandu, the Pandavas, are rivals of their cousins, the Kauravas, and young Karna often sees them fighting. Drona taught the Pandava boys and the Kauravas, and he was also Karna's teacher, but his favorite pupil was Arjuna.


Additional reading: The rivalry between Karna and Arjuna is one of the most important themes of the whole epic; you can read more about Arjuna at Wikipedia: Arjuna.

Curses (pp. 8-15). When Drona refuses to teach Karna the Brahmastra weapon because Karna is not a kshatriya (warrior) but only the son of a charioteer, he goes to the great guru Parashurama to learn the secret. Parashurama hates the kshatriya (warrior) class and accepts only brahmins (priests) as his pupils, so Karna disguises himself as a brahmin. Parahsurama becomes Karna's teacher. One day, Karna allows an insect to dig a hole in his flesh rather than disturb his guru. Parashurama realizes that the boy must be a kshatriya and curses him so that his knowledge of weapons will fail him when he most needs it. Karna accidentally shoots a brahmin's cow, and he is cursed again: Karna will be killed like that cow, unable to defend himself.


Additional reading: The Brahmastra is one of the most powerful of the supernatural weapons called astras. Parashurama (Rama-with-an-axe) is considered to be one of the avatars of Vishnu, and you can read about his epic hatred of the kshatriya class at Wikipedia: Vengeance Against the Kshatriyas.

Prince of Anga (pp. 11-16). Karna returns to live with his mother. He hears about a tournament and wants to compete. Arjuna seems to be the winner, but then Karna comes on to the field and accomplishes all the same feats as Arjuna. Duryodhana is thrilled to find someone with skills to match those of his hated cousin. Karna wants to duel with Arjuna, but another of the royal gurus, Kripa, insists on knowing Karna's lineage. Karna does not know what to say, but Duryodhana declares him to be Prince of Anga. At that moment, Adhiratha the charioteer enters and embraces Karna. Bhima is outraged and mocks Karna for being the son of a charioteer, but Duryodhana embraces and comforts him, and Karna is absolutely loyal to Duryodhana in the years to come when they prepare for war with the Pandavas.


Additional reading: You can read more about Duryodhana, the oldest of the Kaurava brothers, at Wikipedia: Duryodhana.

Before the War (pp. 17-20). The god Indra, Arjuna's father, is worried about the threat that Karna poses and plans to deprive Karna of his armor and earrings. Surya, the sun god, warns Karna in a dream, but when Indra, disguised as a brahmin, asks Karna for alms, Karna gives in because of his generous nature. Indra is impressed and gives Karna the Shakti weapon, but on condition that he can only use it once. Krishna, meanwhile, decides it is time for Karna to learn the trust of his birth. Krishna urges him to come over to the side of the Pandavas, but Karna is loyal to Duryodhana. He asks Krishna to keep the secret of Karna's birth until he dies. Kunti also speaks with Karna, hoping to prevent the war. He still remains loyal to Duryodhana but promises that, of the Pandavas, he will kill only Karna so that, no matter what, Kunti will have five sons.


Additional reading: Indra's weapon is also known as the Vasava Shakti (the Shakti of Indra, Lord of the Vasus = Vasava), and the word Shakti itself means "power." Shakti is also used as the name for the divine feminine force; you can read more about the goddess dimension of Shakti at Wikipedia.

The War (pp. 20-24). Karna, angry that Bhishma is leading Duryodhana's army, refuses to fight at first, but when Bhishma falls on the tenth day of battle, Karna seeks and receives Bhishma's blessing. Bhishma also knows the secret of Karna's birth, but he acknowledges that it is Karna's Dharma to be loyal to Duryodhana. Karna agrees that Drona should be general. As the battle rages, Karna has the chance to kill Bhima, but he spares him because of the promise he made to their mother. At night, Bhima's rakshasa son Ghatotkacha comes out to fight. Without thinking, Karna uses the Shakti weapon to slay Ghatotkacha, instead of reserving it for Arjuna.


Additional reading: You can find out more about Kunti's son Bhima, his rakshasi wife Hidimbi, their son Ghatotkacha at Wikipedia.

General Karna (pp. 25-32). When Drona falls on the fifteenth day, Karna becomes general. He has the chance to kill Nakula in battle but again lets him go. He asks Duryodhana to appoint Shalya as his charioteer so that he can confront Arjuna, whose charioteer is Krishna. On the next day Karna spares Yudhishthira's life, but he still plans to kill Arjuna. Karna's wheel gets stuck in the mud, and then he cannot remember how to use his powerful mantras. He jumps down to release the wheel from the mud, and Arjuna kills him. The curses of Parashurama and the brahmin thus both come true. Kunti reveals the secret of Karna's birth to the Pandavas after the battle. The Pandavas are deeply moved and arrange for Karna's funeral as one of their kinsmen.


Additional reading: To find out more about the life of Karna and his role in the Mahabharata, see Wikipedia: Karna.