This is a guide to Uloopi: The Naga Princess who Fell in Love with Arjuna (Volume 629). You can find it at Amazon.

See the detailed guide below. 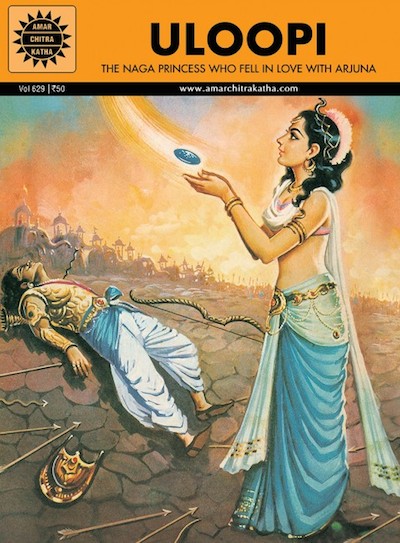 Arjuna and Uloopi (pp. 1-7). The story begins with Arjuna going into exile. When bathing in the sacred Ganges, he is pulled down into the river and wakes up in a palace. Uloopi watches him, the daughter of Kauravya, the naga king of this underwater city. She wants to marry him and promises to return him the next day. They enjoy their hours together, then Arjuna returns to the world above the water.


Additional reading: The offense Arjuna committed was breaking in on Yudhishthira while he was with Draupadi, so this is an exile where he is on his own, without his brothers. For more about the snakes known as nagas, see Wikipedia: Naga. The article contains a list of notable nagas, including Ulupi. This comic book does not mention the son of Ulupi and Arjuna; he is Iravan, and you can read about him at Wikipedia: Iravan.


Additional reading: Manipur is located in far northeastern India; you can learn more at Wikipedia: Manipur. For a different take on the story of Arjuna and Chitrangada, see Rabindranath Tagore's play: Chitra.

King Babhruvahana (pp. 12-14). In Manipur, Uloopi announces herself as Chitrangada's cowife and she embraces Babhruvahana as her son also, promising to visit often. She urges him to excel in archery, telling him stories about Arjuna's greatness. When he grows up, Babhruvahana becomes king of Manipur.


Additional reading: Arjuna's feats as an archer were legendary; you can read more at Wikipedia: Arjuna.

The Curse of the Vasus (pp. 15-17). During the Battle of Kurukshetra, Arjuna slays the great Bhishma, son of the goddess Ganga. The gods in heaven see this happen, and the Vasus want to punish Arjuna by sending him to hell when he dies. Uloopi overhears all this and wants to save Arjuna; her father Kauravya asks the Vasus to relent. They agree on the condition that Babhruvahana kills Arjuna in battle. Uloopi prepares to intervene when the time comes.


Additional reading: Bhishma was the son of the goddess Ganga who came to earth to give birth to the Vasus in human form; one by one as they were born, she drowned them to return them to their heavenly existence. Only the last of the reincarnated Vasus lived his full life as a human; this is Bhishma. You can read more at Wikipedia about the Vasus and about Bhishma, the incarnation of the Vasu named Prabhasa.

The Duel of Arjuna and Babhruvahana (pp. 18-24). When King Yudhishthira performs the horse sacrifice, it is Arjuna's job to travel with the horse and protect it from the kings of the countries through which the horse passes. When he reaches Manipur, he hopes his son the king will fight with him like a true kshatriya, but instead Babhruvahana greets him kindly. Arjuna rebukes him. Uloopi also urges him to fight. Arjuna is pleased when Babhruvahana challenges him on the field of battle, and so they duel. Babhruvahana finally shoots Arjuna through the heart.


Additional reading: You can read more about the horse sacrifice at Wikipedia: Ashwamedha.

The Gem of Life (pp. 25-32). Uloopi watches this all happen. Chitrangada rushes to the battlefield when she learns Arjuna has been killed. She doesn't understand why Uloopi is not grieving, and Babhruvahana is also grief-stricken and vows to die also. At this point, she summons the gem of the snake people (nagas). She explains to Babhruvahana why he had to kill his father, and then he uses the gem to revive Arjuna. Arjuna thanks Uloopi for having saved him, and she is content.


Additional reading: Nagas are associated with the elixir of life, amrita, in the famous story of Garuda and his quest to steal the elixir from the nagas. You can read more about that at Wikipedia: Garuda. The cobra is supposed to have a life-giving jewel in its forehead, jiva-ratna, a life-jewel. It is also sometimes called a naga-ratna, naga-jewel, or naga-mani, naga-gem. Compare also the legend of the wish-granting jewel: cintamani.