This is a guide to Abhimanyu: Star-Crossed Prince (Volume 533). You can find it at Amazon. 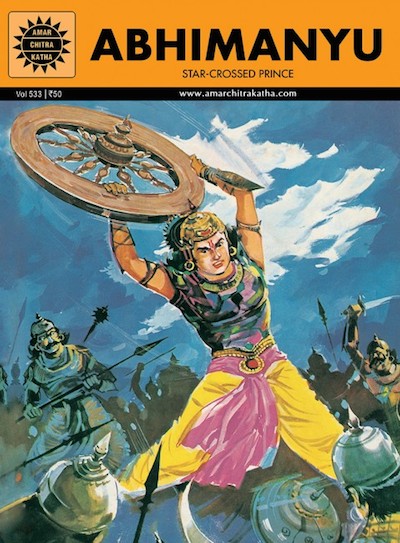 In the commentary below, I have provided links so that you can compare the comic book version with other accounts of the story and/or important background information. Make sure you read BOTH the comic-book version AND the additional reading listed below, and then you will be ready to write your Diary post. Doing the reading and writing the blog post will take 1-2 hours.


Additional reading: You can find out more about Arjuna and Subhadra at Wikipedia, and there is also a long article about Abhimanyu.

Abhimanyu and Uttara (pp. 5-7). The Pandavas spend the thirteenth year of exile in the court of King Virata, and they reveal their identity to him. Virata offers his daughter Uttara to Arjuna, and Arjuna proposes that she marry Abhimanyu. Virata agrees and Abhimanyu and Uttara get married. Krishna attempts to make peace between the Pandavas and the Kauravas now that the time of exile is over, but the Kauravas want war.


Additional reading: In Sanskrit there is a long "a" letter ("ah") and a short "a" ("uh") letter, but in English, we have only one letter "a," which can lead to some confusion with transliterated Sanskrit names. For example, Uttarā (the mark over the "a" is sometimes used to indicate a long a) is the feminine name; Abhimanyu marries Princess Uttara (Uttarā). Her brother, meanwhile, is named Uttara (short a), the masculine form of the name.

The battle begins (pp. 8-13). On the first day of battle, Abhimanyu bravely attacks Bhishma, general of the Kaurava army. The battle goes back-and-forth for days. Arjuna kills Bhishma, and Drona becomes the Kaurava general. In Arjuna's absence, Drona attacks in a special formation that only Abhimanyu knows how to break. Abhimanyu explains that he knows how to break into the formation but not how to get back out again, and Yudhishthira promises that the army will be able to protect him if he can just break the formation.


Additional reading: There is a great story about why Abhimanyu only has this partial knowledge of the formation: he learned about it while in his mother's womb as his father, Arjuna, was speaking about it. But Arjuna did not explain all the details, so, as a result, Abhimanyu knew only how to break through the formation, not how to exit it (see Wikipedia for the story). The name of Drona's special formation is Chakravyuha, from the word "chakra" which means a circle or a disk because it looks like a circle from above; the warriors on the ground experience it as a labyrinth. Here is an illustration from the Wikipedia article: Padmavyuha - Chakravyuha. 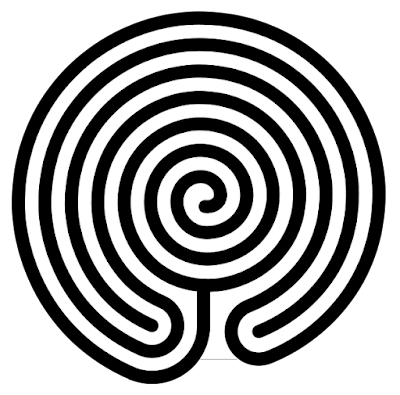 Abhimanyu battles alone (pp. 14-19). Abhimanyu rides out in his chariot to confront Drona's massed troops. Much to Drona's surprise, Abhimanyu is able to break through the formation, but Jayadratha closes the breach, cutting Abhimanyu off alone. Abhimanyu fights bravely, and then Duryodhana, eldest of the Kauravas, charges him. Drona fears for Duryodhana's life and manages to rescue him, and then Drona and his men attack Abhimanyu.


Additional reading: This is the same Jayadratha who attempted to abduct Draupadi when the Pandavas were living in the forest. You can read more about Jayadratha at Wikipedia; he is married to Duhshala, the one sister to the one hundred Kaurava brothers.


Additional reading: Don't confuse this Lakshmana with the famous brother of Rama in the Ramayana, also named Lakshmana. There is a wonderful folktale about Lakshmana and why he vowed to never take a wife; you can read that story in the Wikipedia article about him: Lakshmana Kumara; the story if also told in the article about Revati and her daughter Vatsala.

The death of Abhimanyu (pp. 26-32). Then use their arrows to slice through the reins of Abhimanyu's horses, shatter his bow, and slay his chariot driver. Abhimanyu then fights on foot, using his sword, until Drona and Karna shatter both his sword and his shield. He then grabs the wheel of his chariot and uses that as a weapon. When the wheel shatters, Abhimanyu grabs a mace and fights with Duhshasana's son, and it is Duhshasana's son who strikes the fatal blow. The Kauravas dance with joy around Abhimanyu's body... but in the end they will all perish in the war as Arjuna and the Pandavas vow to avenge Abhimanyu's death.


Additional reading: At the time of Abhimanyu's death, his wife Uttara is pregnant with their child; it is that child, Parikshit, who will be the only survivor to carry on the family line, inheriting the throne of Hastinapura.