This is a guide to The Gita: The Song of Eternal Wisdom (Volume 505). You can find it at Amazon.

Summary: The story begins with Yudhishthira's installation as emperor in a rajasuya sacrifice at his palace in Indraprastha. His jealous cousin Duryodhana dethrones Yudhishthira in a dice game, and the Pandavas go into exile. Duryodhana prepares for war after the exile is over, rejecting Krishna's attempt to make peace. When battle begins, Arjuna despairs at the thought of fighting his family and his guru. Krishna then teaches Arjuna the philosophy of life known as the Bhagavad-Gita, "The Song of the Lord," and Arjuna sees Krishna manifested in his divine form. His doubts resolved, Arjuna is ready to fight. You can learn more about the Gita at Wikipedia, and you can also choose to read the Gita itself as a reading option: Bhagavad-Gita. 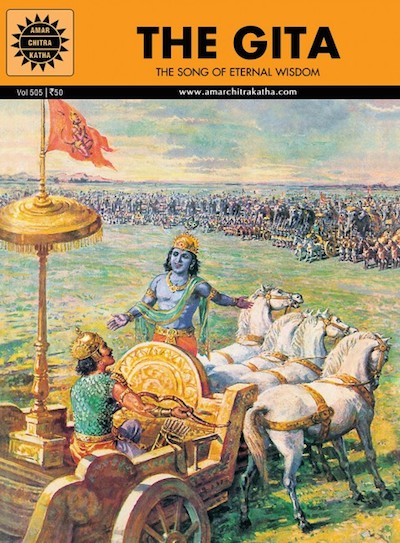