This is a guide to Ancestors of Rama: A Noble Inheritance (Volume 572). You can find it at Amazon. 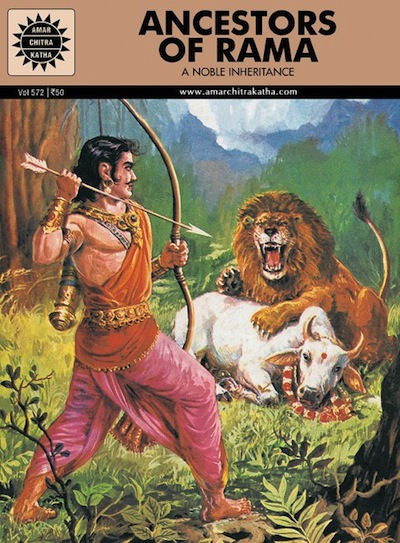 King Dilipa (pp. 1-6). King Dilipa, Rama's great-great-grandfather, and his wife Sudakshina had no children. He consults the sage Vashishtha who explains that the divine cow, Surabhi, planned to bless Dilipa with many children, but because Dilipa was flirting with his young bride, he did not pay attention to Surabhi, so the blessing became a curse. They need to atone by honoring Nandini, Surabhi's daughter.


Additional reading: You can read about both Surabhi, also known as Kamadhenu, at Wikipedia. Nandini means "she who brings joy," and it thus also means "daughter."

Nandini (pp. 6-10). Nandini decides to test Dilipa's valor. When Dilipa sees her seized by a lion, he is ready to fight the lion, but finds he is paralyzed. The lion explains why he is going to kill the cow, and Dilipa offers his life in her place. Nandini created the illusion to test him, and now she grants his wish for a son. His name is Raghu.


Additional reading: You can read more about Raghu at Wikipedia. This entire dynasty was often referred to as the "Raghu Dynasty," or Raghuvamsha. The poem by the classical Sanskrit poet Kalidasa with that title — Raghuvamsha — is the source for the stories in this comic book. Here is an English translation of the poem.

Raghu (pp. 11-16). When Raghu is a young prince, Dilipa assigns him to guard the horse in an Ashwamedha, a horse sacrifice. Raghu thus defeats many kings, but some of them vow revenge. The god Indra is also angry at Raghu's ambitions. Even though Indra makes himself invisible, Raghu sees him take the horse and attacks Indra. Indra finally hurls his vajra weapon at Raghu, but Raghu survives and Indra rewards him. Dilipa then crowns Raghu as king.


Additional reading: You can read more about the horse sacrifice, Ashwamedha, at Wikipedia.

Raghu and Kubera (pp. 17-21). When the vengeful kings defy him, Raghu vows to conquer the whole world. He succeeds, and then he distributes all the wealth to the kings and his subjects. A sage arrives after the wealth has been distributed to ask for as massive sum to pay his teacher. Raghu realizes he will have to get the wealth from Kubera, the god of wealth, himself. Kubera, fearing Raghu's arrival, sends a shower of gold into the palace. The sage blesses Raghu, promising him a great son. This son is Aja.


Additional reading: The god Kubera once ruled Lanka, but when Ravana took over Lanka, Kubera went to live in the mythical city of Alaka in the Himalayas, which is where he is living during the time of this story. You can find out more about Kubera at Wikipedia.

Aja and the Elephant (pp. 21-23). Aja is a virtuous prince, and Raghu sends him to Vidarbha to compete for the hand of Indumati, daughter of King Bhoja in a swayamara. On the way, an elephant attacks Aja; when he spears the elephant, it transforms into a gandharva, a celestial musician, who gives Aja a magical spear.


Additional reading: For more about the celestial gandharvas, see Wikipedia. For the tradition of bride-choice (literally, self-choice), see the Wikipedia article about the swayamvara.

Indumati's Swayamvara (pp. 24-31). The other princes are intimidated by Aja's arrival at the swayamara. Princess Indumati inspects the competitors and chooses Aja, as Ganga joins the ocean. The rivals plan to attack the happy couple on their way home to Ayodhya. In the battle, Aja uses his magic spear, putting his enemies to sleep. Raghu then makes Aja king and Aja's son will be King Dasharatha, Rama's father.