This is a guide to Vali: The Downfall of an Arrogant King (Volume 546). You can find it at Amazon. 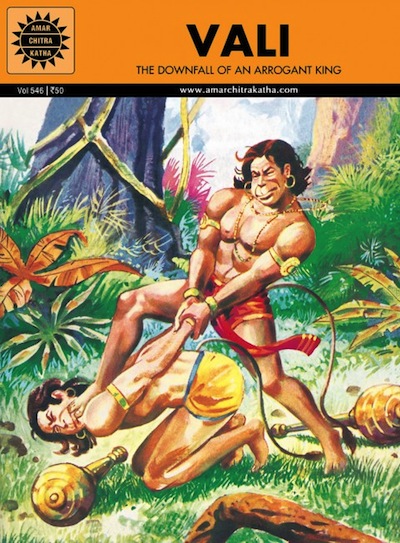 Dundubhi (pp. 1-7). When Vali was king of Kishkindha, a mighty rakshasa named Dundubhi roamed the world. After terrifying the Ocean, Dundubhi went to do battle with Himavan (the Himalayas). Himavan tells Dundubhi that Vali would make a worthy opponent. Dundhubi turned himself into a water buffalo and went to Kishkindha. Vali defeated Dundhubi and threw his carcass on Rishyamuka mountain, near the hermitage of the rishi Matanga, and for this the rishi cursed Vali: if he set foot on the mountain, he would die.


Additional reading: As you can see, Vali has extraordinary powers. You can read more about the legend of Vali's super-strength at Wikipedia.

Mayavi (pp. 7-12). Next, Dundubhi's son Mayavi came to challenge Vali. Vali's brother, Sugriva, also joins in the chase. Mayavi runs into a cave. Vali goes into the cave and tells Sugriva to wait outside. Days pass. When Sugriva hears a loud roar and sees blood flowing out of the cave, he concludes that Vali is dead. To trap Mayavi inside, he seals up the cave with a giant boulder. But Vali was alive, and found himself trapped in the cave.


Additional reading: In other versions of the story, Mayavi is not Dundubhi's son but his brother. In that version they are the children of the divine architect Maya and the apsara Hema, which makes them brothers of Mandodari, who will later be the wife of Ravana; this version of the story appears in the Uttara Kanda section of Valmiki's Ramayana.

King Sugriva (pp. 13-17). In Vali's absence, Sugriva becomes king, with Hanuman as his minister. But Vali finally pushes aside the boulder. He returns home and accuse Sugriva of having trapped him on purpose. Sugriva had to leave the kingdom, but Vali took his wife, Ruma, for himself. Hanuman and Sugriva went to Rishyamuka where Vali could not follow them.


Additional reading: You can read more about Vali's main wife Tara at Wikipedia, and there is also a brief article about Ruma, who is Sugriva's main wife. In some versions of the story, Tara is not a monkey but is instead an apsara, a celestial being.

Rama and Lakshmana (pp. 18-24). When Sugriva sees Rama and Lakshmana in the forest, he suspects they are Vali's agents. He sends Hanuman, in disguise, to investigate. Rama explains that he is seeking Sugriva to ask for his help in rescuing Sita. Hanuman carries them on his shoulders to meet Sugriva. Rama and Sugriva vow to help each other. Rama proves his strength by kicking aside Dundhubi's skeleton. He also does better than Vali once did in a test of archery.


Additional reading: Hanuman has many supernatural powers, including the ability to change his shape and his size, along with the ability to fly. For more about Hanuman, see the detailed Wikipedia article.

Sugriva Fights Vali (pp. 25-29). Sugriva calls Vali out to fight with him but runs away when Vali gets the upper hand. Rama explains that he could not tell one brother from another, so he was not able to intervene. Rama gives Sugriva a garland to wear around his neck. Again, Sugriva challenges Vali. From his hiding place, Rama shoots an arrow at Vali.


Additional reading: The fact that Rama killed Vali in such an apparently dishonorable way has provoked much discussion, with different storytellers and commentators finding ingenious ways in which to justify Rama's actions. There is a nice discussion of this in Stuart Blackburn's Inside the Drama House, which you can read online here: Rama's Confession.

Vali's Death (pp. 29-31). Vali protests that what Rama did was not right, and Rama justifies himself. Vali tells his wife Tara and his son Angada to trust Rama, and Vali entrusts his wife and son to Sugriva, bestowing on Sugriva his golden chain.


Additional reading: Other versions of the story tell us that this golden chain was a gift to Vali from the god Indra, his father. In some versions, this chain is what gives him the supernatural ability to take half of the strength of his opponents.