Guide: The Lord of Lanka

This is a guide to The Lord of Lanka: The Rise and Fall of a Demon King (Volume 541). You can find it at Amazon. 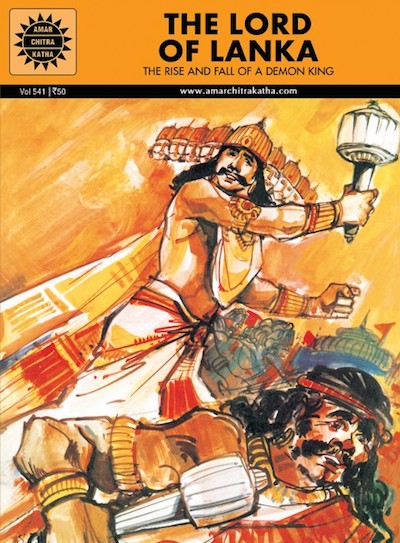 Sumali (pp. 1-4). The story begins with Sumali, ancient king of the rakshasas, and his daughter Kaikesi. While searching for a husband for her among men, he sees the great wealth of Kubera, king of Lanka and son of the sage Vishrava. He urges Kaikesi to seduce Vishrava. He marries her and they have four rakshasa children: Ravana, Kumbhakarna, Surpanakha, and Vibhishana.


Additional reading: You can read more about Sumali the asura and Vishrava the sage at Wikipedia. There is also a long article about Kubera.

Ravana's Sacrifice (pp. 4-7). The young Ravana is jealous of his half-brother Kubera's great wealth. He goes with his sister and two brothers to Gokarna to perform sacrifices. Ravana cuts off nine of his heads, casting them into the sacrificial fire. As he is about to cut off the last one, Brahma appears and grants him a boon. Brahma refuses to give him immortality but Ravana cannot die at the hand of a god, demon, rakshasa, serpent or spirit.


Additional reading: You can read more about the sacred city of Gokarna at Wikipedia.


Additional reading: The sacred peak of Mount Kailash is famous for being the home of the god Shiva, as you will see in the next episode.

Ravana and Shiva (pp. 11-15). Ravana defeats Kubera in battle and seizes the Pushpaka chariot. Despite a warning not to disturb Shiva, Ravana lifts up Mount Kailash. The mighty Shiva traps Ravana beneath the mountain, so Ravana begins to sing, beginning Shiva to release him. Pleased, Shiva releases Ravana and gives him a sword.


Additional reading: For a different version of this episode, see Ravana Humbled. See also the Wikipedia article which lists even more versions of the Ravananugraha.

Vedavati-Sita (pp. 15-18). Ravana finds the beautiful Vedavati meditating in the jungle. She rejects Ravana's advances and throws herself into the fire, vowing she will be reborn to destroy him. Ravana later found a beautiful baby inside a lotus, but his ministers predicted she would cause his death, so he cast her into the river. By a miracle she appeared before King Janaka, who adopted her as his own daughter. By breaking Shiva's bow, Rama won Sita as his wife.


Additional reading: You can read more about the famous legend of Vedavati at Wikipedia. Like Sita, she is an avatar of the goddess Lakshmi.

Rambha (pp. 21-23). Ravana happened to see the beautiful Rambha on Mount Kailash. She explains that she is going to marry Nalakubera, son of Kubera, Ravana's half-brother and rival. Ravana attempted to take Rambha for himself, and Nalakubera cursed him: if Ravana ever married a woman against her will, his heads will explode.


Additional reading: Rambha is an apsara; you can read more about her at Wikipedia.

Sita and Ravana (pp. 24-30). Ravana finds Sita in Dandaka forest and abducts her. Rama marches on Lanka with an army to rescue Sita. Vibhishana urges Ravana to return Sita and, when Ravana refuses, Vibhishana joins Rama's side. Ravana show Sita the head of Rama, and she faints, thinking he is dead. Later, the illusion vanishes.


Additional reading: The comic book does not name the friend who consoles Sita when she fears Rama is dead. That friend is Sarama, sometimes considered to be the wife of Vibhishana.


Additional reading: You can read more about Vibhishana at Wikipedia. He is considered one of the immortals known as Chiranjivis.