This is a guide to Ashwini Kumars: Tales of Devotion from the Vedas (Volume 669). You can find it at Amazon.

Pirates raid the king's ships, so his son, Prince Bhujyu, mounts a counterattack, asking for the blessings of the gods, including the Ashvin Twins. A storm sinks the ships, and the prince prays to the Ashvins to rescue him. He then goes to sea again to attempt to complete his mission. There is an allusion to the rescue of Bhujyu in the Rig Veda, and when Bhujyu prays to the gods he mentions other names that appear in the Vedic hymns that invoke the Ashwins.

The comic book also contains the story of the sage Atri and his sons who are beset by dasyus in the forest, and they pray to the Ashwins to come to their rescue. This story is also inspired by an allusion in the Rig Veda, and you can find out more about the sage Atri at Wikipedia. 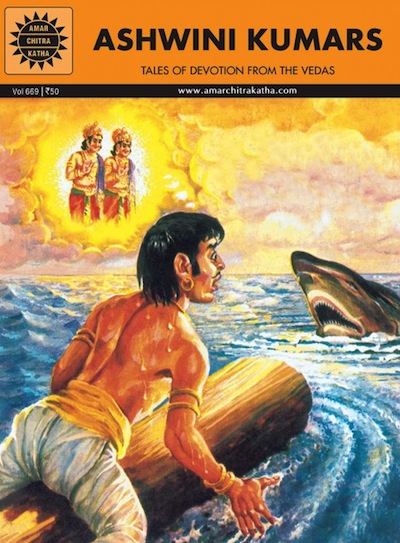