This is a guide to Vasantasena, A Dancer and Her Most Precious Jewel (Volume 657). You can find it at Amazon.

You can find out more about Vasantasena at Wikipedia, and about Shudraka's play, The Little Clay Cart, in which she appears.

The evil king Palaka, aided by his wicked brother-in-law, Samasthanaka, who pursues the beautiful Vasantasena. She wants nothing to do with him, and is instead in love with a poor but good-hearted man named Charudatta (who has a wife and a son, but don't worry: he can take a second wife too). Through the twists and turns of the plot, Charaudatta comes into possession of Vasantasena's jewels, and then loses them, but through another series of twists and turns, Vasantasena gets her jewels back while her slave Madanika wins her freedom. Things all seem to be going well, but then Vasantasena unexpectedly falls into the clutches of the evil Samasthanaka again, while the king's rival, Aryaka, has escaped from prison and ends up taking Vasantasena's place in a carriage, much to Charudatta's surprise. Charudatta is then made to stand trial for a crime committed by Samasthanaka (or, rather, a crime Samasthanaka thinks he has committed). It all works out in the end, though, with yet more twists and turns in the plot that will probably remind you of a Shakespearean comedy, although this play was written a thousand years before Shakespeare! 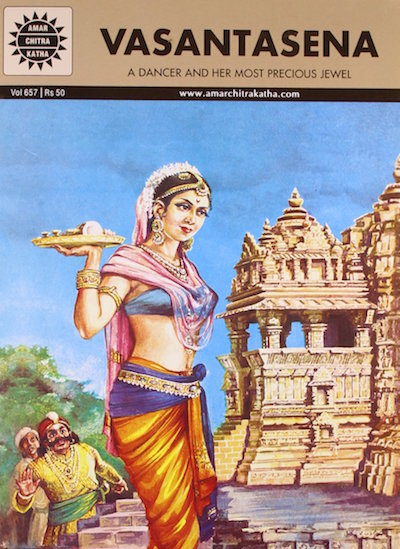