This is a guide to Mahabharata: The Great Epic of India (Volume 582). You can find it at Amazon.

Summary: Believe it or not, this single comic book provides an overview of the entire epic! It starts with the boyhood rivalry of the Pandavas and Kauravas, then the Pandavas' successes followed by their losing the game of dice and the years of exile (including the Gandharvas' defeat of Duryodhana and the story of Duryodhana's failed cattle raid).

The second half focuses on the great war, including Bhishma's fall, Arjuna's revenge for Abhimanyu, the death of Drona, the duel of Karna and Arjuna, and the final Kaurava defeat followed by Ashwatthaman's night raid, with Yudhishthira being crowned king in the end. You can read about all the main characters of the epic at Wikipedia. 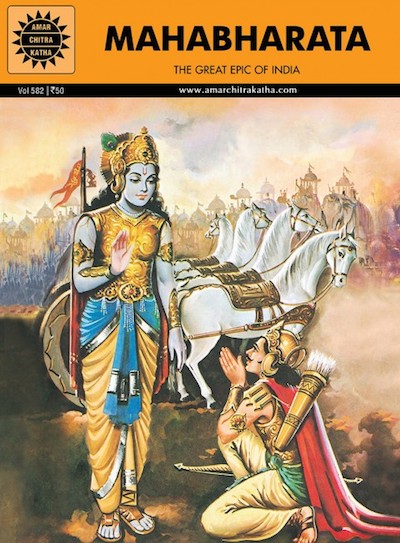