This is a guide to Tulsidas: The Poet Who Wrote Ram-Charit-Manas (Volume 551). You can find it at Amazon.

Summary: Tulsidas was a poet and saint (1532-1623), author of one of the most famous versions of the Ramayana. The comic book begins with the sinister omens surrounding Tulsidas's birth. Tulsidas devoted himself to Rama, and eventually left his family to preach the story of Rama in Hindi. He experienced visions of Hanuman, Rama and Lakshmana, and Shiva, and he was also involved in the politics of his time (you can read about Rana Pratap at Wikipedia). For more about Tulsidas, see Wikipedia: Tulsidas. 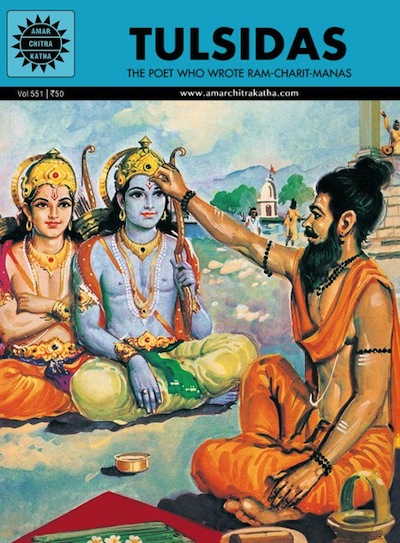