This is a guide to Surya: How the Sun God Was Tamed (Volume 566). You can find it at Amazon.

Summary: The story begins with Sanjna, the daughter of Vishwakarma. She loves Surya, and her father arranges their marriage. They have a son: Manu. One day, unable to bear Surya's light, she turns away, and so he curses her to give birth to Yama, the god of death, and his inconstant twin, the girl Yamuna. Sanjna summons her own shadow, Chhaya, and sends her to Surya in her place, while she returns home, but her father sends her away, so she turns herself into a horse. Chhaya has more children with the sun, and she loves them more than Sanjna's children. Yama denounces the false Sanjna and Surya confronts her. Surya seeks Sunjna, she turns back into a woman, and they all make a family together, Surya, Sanjna and Chhaya, and their children. 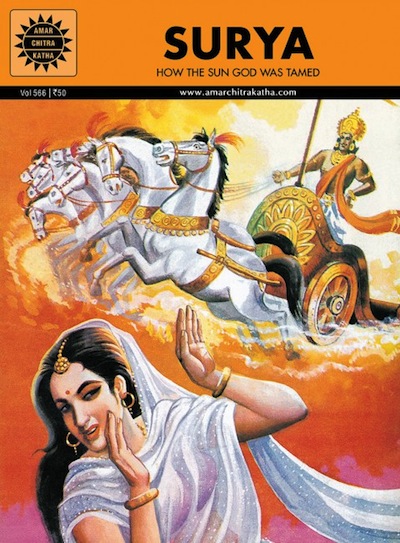