This is a guide to Tales of Durga: Tales of the Mother Goddess (Volume 514). You can find it at Amazon.

Summary: The first story is Durga, The Slayer of Mahisha. Mahisha the asura, hoping to live forever, obtained the boon that he could only be killed by a woman. He confidently attacks Indra and occupies his throne. The angry gods conjure up Devi Durga, and they give her weapons. In his buffalo form, Mahisha (the name means "buffalo") attacks her, and then attacks her in many other forms, but Durga finally kills him. The next story is Chamundi. Shumbha, the Lord of the Asuras, with his generals Chanda and Munda, chases the gods from their heaven. The gods pray to Durga, and the goddess Ambika, a manifestation of Durga, springs forth from Parvati, and Shumbha desires to possess her, and she says she will only marry someone who can defeat her in battle. She is able to turn asuras to ashes with a single word. Ambika then generates Kali from her forehead, who crushes asuras by hurling an elephant at them. Because Kali slays both Chanda and Munda, she acquires the name Chamundi. The final story is How Durga Slew Shumbha. The gods manifest Brahmani, Vaishnavi and Maheshwari to do battle with Shumbha, and Ambika generates Chandika. Hundreds of Shakti manifestations do battle with Shumbha. The asura Raktabeeja scoffs at the women and attacks Indra's Shakti; she wounds him, and each drop of blood generates another Raktabeeja. Thousands of Raktabeejas face the Shaktis. They prevent the blood of the Raktabeejas from reaching the ground and finally they slay them all. They then kill Nishumbha, who is Shumbha's brother. All the Shaktis merge into Durga, and she slays Shumbha at last. 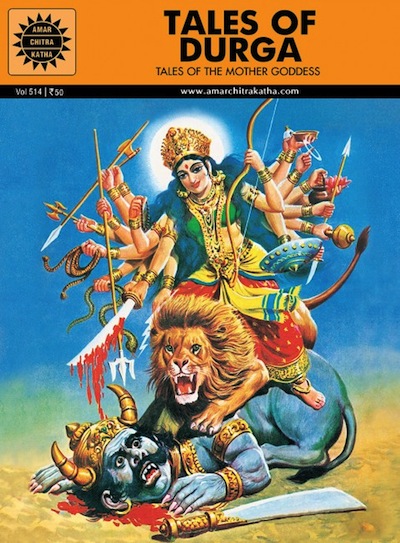