This is a guide to Parashurama: Sixth Incarnation of Vishnu (Volume 764). You can find it at Amazon.

Summary: The story begins with Bhrigu and his son Richika who married Satyavati. Bhrigu gives his daughter-in-law and her mother sacred rice to produce sons, but they mix up the pots, and this leads to a mix-up in the lineage: Satyavati's son Jamadagni will have a son, Parashurama, who, although born a kshatriya, will live a brahmin's life. He is also an incarnation of Vishnu, born to put a stop to the warriors like Kartavirya Arjuna who are wreaking havoc on earth and in heaven.

Mother Earth begs Kashyapa to make Parashurama stop the slaughter, and Parashurama then gives away all his wealth to the brahmins, and he gives his weapons to Drona. Parahsurama then departs for the Mahendra mountains to live the life of a hermit ascetic.

You can find out more about Parashurama at Wikipedia. 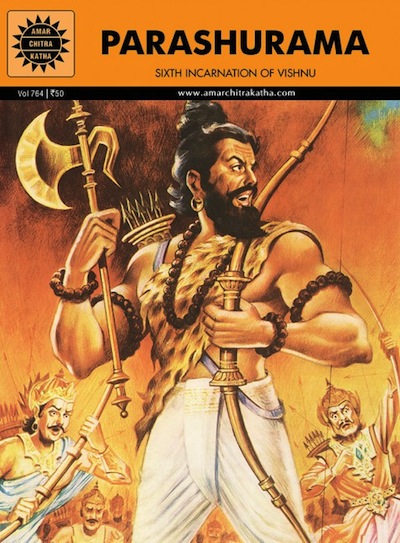