This is a guide to Aniruddha: Beloved Grandson Of Krishna (Volume 663). You can find it at Amazon.

Summary: Usha is an asura princess, daughter of the thousand-armed King Bana, a worshiper of Shiva. One day Usha dreams of a beautiful young man. She sees a painting of Krishna and his son Pradyumna; they are similar to the boy of her dreams. Her friend Chitralekha transports herself magically to Dwaraka and brings back Aniruddha, Pradyuma's son, asleep in his bed. They live happily in a secret marriage, but when Bana finds out, he is enraged. Meanwhile, Krishna and Pradyumna come looking for the missing boy. A great battle ensues, with Shiva fighting on Bana's side. Krishna wins in the end, but Shiva asks him to spare Bana's life, and then Usha goes with Aniruddha to live with him in Dwaraka. 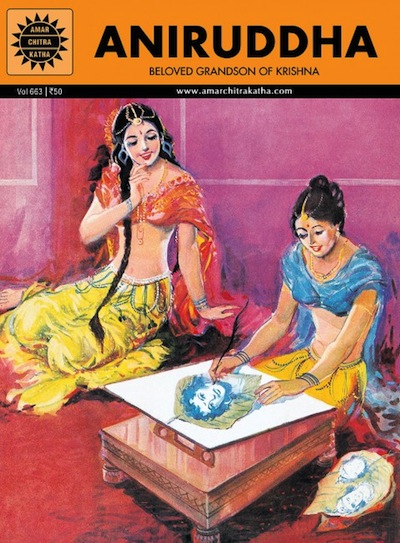