This is a guide to Krishna and Shishupala: He Was Forgiven a Hundred Times (Volume 589). You can find it at Amazon.


You will find a detailed Reading Guide below with lots of links! 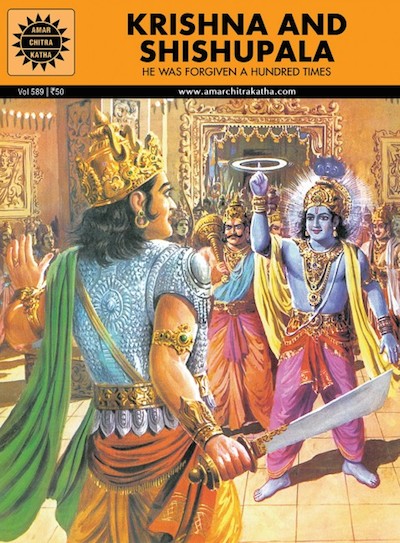 Birth of Shishupala (pp. 1-3). The King of Chedi, Damaghosha, is distressed by the birth of his son Shishupala: the baby has four arms, three eyes, and he brays like a donkey. Because of the bad omens, the priests advise the king to abandon the child but a supernatural voice proclaims that the prince will die only at the hands of his destined killer. The mother, Queen Shrutadeva, wants to know who this destined killer will be, and the voice explains that the child's third eye will disappear and extra arms will fall off when he meets his killer.


Additional reading: According to the Vishnu Purana, Shishupala is the latest in a series of incarnations that have been enemies of Vishnu's earthly avatars: long ago, he was Hiranyakashipu, who was defeated by Vishnu's avatar Narasimha; then he was Ravana, defeated by Rama; and now Shishupala is born as the enemy of Krishna.

Krishna's Promise (pp. 3-7). Balarama tells his brother Krishna about the birth of the strange child born to their aunt. They go visit, and when the baby sees Krishna the third eye disappears as do the extra arms. The mother begs Krishna to promise that he will forgive Shishupala any offense. Krishna promises to forgive him one hundred times. Just to be safe, the king sends the child to be raised in Magadha, the home of Krishna's sworn enemy, the emperor Jarasandha.

Rukmini (pp. 7-10). Jarasandha entrusts Rukmi, prince of Vidarbha, with the training of Shishupala. They grow close, and Rukmi hopes his sister Rukmini will marry Shishupala without even holding a swayamvara to choose the groom. Rukmini, however, loves Krishna and asks him to elope with her away to escape the arranged marriage. Jarasandha realizes this could be trouble for Shishupala, and Balarama also fears trouble, so he goes to Vidarbha too.


Additional reading: You can read more about the tradition of the swayamvara at Wikipedia. There are also Wikipedia articles about Rukmi and about Rukmini, who is Krishna's chief wife and is regarded as an avatar of the goddess Lakshmi (as Rama's wife Sita was also).

Krishna and Rukmini (pp. 10-14). On the day of the wedding, Krishna carries Rukmini off in his chariot. Rukmi urges the kings attending the wedding to chase after Krishna, but Balarama and his soldiers challenge them. Shishupala is dismayed that Krishna and Rukmini have escaped them, and his friend King Shalva vows revenge, as does King Dantavaktra. Shishupala commits many crimes against Krishna and the Yadavas after that, but Krishna forgives them all because of the promise he made to Shishupala's mother.


Additional reading: You can see a list of some of Shishupala's crimes in this Wikipedia article: Chedi Kingdom - King Shishupala.


Additional reading: You can learn the details of Jarasandha's death in this Wikipedia article: Jarasandha - Death.

Death of Shishupala (pp. 17-21). When Yudhishthira singles out Krishna as the guest of honor at the ceremony, Shishupala is outraged and shouts insults at Krishna. Krishna declares that while he has forgiven Shishupala a hundred times before, he has now committed one offense too many. Using his chakra, Krishna beheads Shishupala.


Additional reading: In addition to being part of the Mahabharata, the slaying of Shishupala is also the subject of another famous poem: Shishupala Vadha. There is also an article about Krishna's Sudarshana chakra.

Shalva's revenge (pp. 21-24). When King Shalva hears the news, he is furious. He plans to destroy Dwaraka while Krishna and Balarama are staying with King Yudhishthira at Indraprastha. He asks Shiva to give him an invisible chariot to travel on land, sky and earth. Shiva promises that Maya, the divine engineer, will deliver the chariot to King Shalva. Shalva then attacks Dwaraka from the air, and the people flee in terror to Pradyumna, Krishna's son. Meanwhile, in Indraprastha, Krishna realizes that something is wrong in Dwaraka.

Shalva the magician (pp. 25-29). Balarama rushes to Pradyumna's aid, while Krishna pursues Shalva. Shalva launches the Shakti weapon, but Krishna's arrows shatter it. Krishna then knocks Shalva out of the chariot, but his body vanishes when it hits the earth. As Krishna searches for Shalva, a messenger from Krishna's mother Devaki reports that Shalva has abducted Krishna's father, and then Shalva himself appears with Krishna's father, Vasudeva. He chops off Vasudeva's head and then flies off. Krishna realizes that this must be an illusion when both the messenger and corpse vanish.


Additional reading: The word Shakti itself means "power." Shakti is also used as the name for the divine feminine force; you can read more about the goddess dimension of Shakti at Wikipedia.

Death of Shalva (pp. 30-31). Krishna shatters Shalva's chariot and after a fierce struggle, Krishna uses his chakra to behead Shalva. The enemies of the Yadavas are now dead and the people are safe.


Additional reading: You can read more about Krishna's people, the Yadavas, and the city of Dwaraka at Wikipedia.