This is a guide to Ghatotkacha: The Chivalrous Demon (Volume 592). You can find it at Amazon. 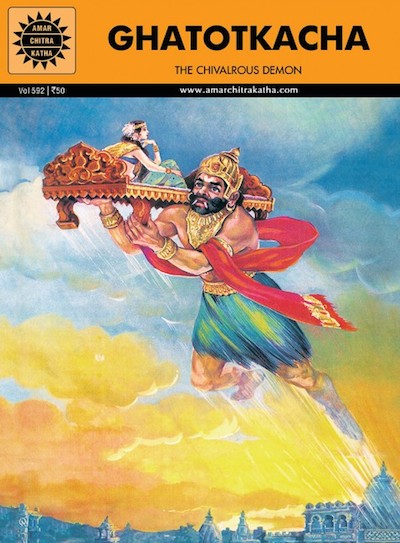 
Additional reading: You can read more about Kunti and the Pandava brothers at Wikipedia, with separate articles about each brother. The most important for this story are Bhima and Arjuna.

Bhima's rakshasa wife and son (pp. 3-6). In that same forest live a rakshasa brother and sister, Hidimba and Hidimbaa. They like to eat humans! When Hidimbaa sees Bhima, she falls in love and changes herself into a beautiful woman. Her brother sees this and attacks Bhima. Bhima's mother and brothers hear what is happening and come watch the fight. Bhima kills Hidimba, and then Hidimbaa (still in her human form) asks to marry Bhima. Bhima and Hidimbaa have a son: Ghatotkacha. As a rakshasa, he is full-grown at birth and he has magical powers. He promises to come whenever his father needs him. The Pandavas continue their journey in exile, leaving Hidimbaa and Ghatotkacha in the forest.


Additional reading: The spelling "aa" is used here to convey the long vowel in Sanskrit. In Sanskrit there is a long "a" letter ("ah") and a short "a" ("uh") letter, but in English, we have only one letter "a," which can lead to some confusion with transliterated Sanskrit names. Hidimba (short a) is the masculine name, and Hidimbā (Hidimbaa, long a) is the feminine form. She is also called Hidimbi. You can read more about rakshasas at Wikipedia. This comic book explains the story of why they are born full-grown: Kubera (see the section about "Rakshasas in Lanka").

Abhimanyu and Vatsala (pp. 7-9). The Pandavas gain a kingdom and build a beautiful palace, making the Kauravas even more jealous. They lure the eldest Pandava, Yudhishthira, into a game of dice and he loses everything. The Pandavas go into the forest as exiles, this time with their shared wife, Draupadi. The great Pandava archer, Arjuna, leaves his wife, Subhadra (Krishna's sister), and son, Abhimanyu, behind; Subhadra and Abhimanyu go to Dwaraka, Subhadra's family home. Abhimanyu is engaged to Vatsala (the daughter of Balarama, Krishna's brother), but Balarama decides to marry Vatsala to Lakshmana, Duryodhana's son instead. As Subhadra and Abhimanyu cross the forest, a rakshasa attacks them: it is Bhima's son, Ghatotkacha, Abhimanyu's cousin.


Additional reading: This wonderful story about Vatsala is not part of the traditional Mahabharata, but it is a famous folktale. You can learn more at these Wikipedia pages: Revati (she is Vatsala's mother) and Lakshmana Kumara. You can learn more about Abhimanyu in this comic book: Abhimanyu.

Ghatotkacha and the wedding (pp. 10-15). Ghatotkacha agrees to help Abhimanyu. The rakshasas go to Dwaraka and, disguised as humans, buy up the shops and offer new clothes for old. The Kauravas, who have come for the wedding of Vatsala and Lakshmana, are delighted. Ghatotkacha then carries Vatsala away to Abhimanyu. Next, he transforms himself to look like Vatsala. During the wedding ceremony, Lakshmana is surprised by how tight the bride's grip is; Ghatotkacha squeezes Lakshmana's hand so tight that he faints. The rakshasas all fly away, as do the new clothes, leaving the Kauravas naked and helpless. Abhimanyu then comes to Dwaraka with Vatsala and they live happily there.


Additional reading: This story about Ghatotkacha in disguise might remind you of the story about the Norse god Thor disguised as a bride.


Additional reading: Arjuna eventually slays Bhagadatta; you can read about that confrontation at Wikipedia.


Additional reading: You can read more about the battle chakrams and supernatural astra weapons at Wikipedia, including a specific article about the god Indra's Vajra. Many of the astras are associated with specific gods; the Vayu Astra is named for Vayu, the god of wind.

Ghatotkacha falls (pp. 27-31). When Ghatotkacha shrinks and becomes invisible, shooting forth weapons of fire, the terrified Kaurava warriors beg Karna to use the Shakti weapon of Indra, which can only be used once. Karna wants to save that weapon for Arjuna, but he realizes he must save the Kaurava warriors, so he launches the weapon at Ghatotkacha. As Ghatotkacha is dying, he makes his body into a gigantic size and falls on a Kaurava regiment, crushing them to death beneath his corpse. The Pandavas mourn Ghatotkacha, and Krishna explains that his death has saved Arjuna's life and guaranteed a Pandava victory in the end.


Additional reading: The rivalry between Arjuna and Karna is one of the main themes of the Mahabharata, and this comic book explains how Karna came to possess the Shakti weapon: Karna.