This is a guide to The Sons of Rama: Luv and Kush — The Invincible Twins (Volume 503). You can find it at Amazon. 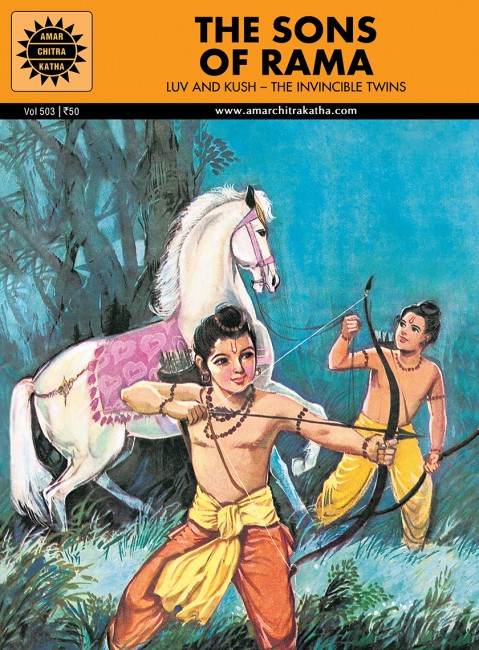 Rama's Rule (pp. 1-5). The comic book begins as Rama orders his brother Lakshmana to take Sita away, even though she is pregnant. Sita is terrified at being left alone.


Additional reading: There is an overview at Wikipedia of the Uttara Kanda, the final book of Valmiki's Ramayana.

Valmiki (pp. 6-10). Valmiki rescues Sita and takes her to his hermitage where she gives birth to twin sons. Valmiki educates the boys and tells them of Rama's accomplishments, all the while concealing the fact that he is their father.


Additional reading: The Wikipedia article about Valmiki tells you about how the sage Valmiki began his life as a robber named Ratnakar and how he later went on to write the Ramayana. There is a famous story about how he invented the poetic śloka meter out of grief and anger over a bird slain by a hunter.

Rama's Aswamedha (pp. 11-15). Back in Ayodhya, Rama prepares for the royal sacrificial ritual of the Horse-Sacrifice, the Aswamedha. Rama uses a golden statue of Sita to take her place during the ritual.

Additional reading: You can learn about the Horse-Sacrifice at Wikipedia; pay special attention to the section on the Aswamedha in the Indian epics. There are two such sacrifices in the Ramayana: one performed by Dasharatha, and the one performed by Rama which you are reading about in this comic book.

You can also look at the Wikipedia article on Swaha to understand p. 14 where the priests are shouting "Swaha!"

Luv and Kush (pp. 16-22). As the horse wanders, Luv and Kush capture it and defeat Rama's brother Shatrughna when he attempts to recapture the sacred horse. Rama then sends out Lakshaman: after Lakshmana wounds Kush, Luv challenges him to a duel.

Additional reading: To learn more about Luv (Lava) and Kush (Kusha), see the articles in Wikipedia: Lava and Kusha.

Bharata and the Monkeys (pp. 23-25). Hearing that Lakshmana has fallen, Rama then sends out Bharata and the monkey army led by Hanuman. They also fail.

Additional reading: The "monkeys" here who are Rama's allies are called vanaras in Sanskrit; you can read more about the vanaras at Wikipedia.

Rama and his Sons (pp. 26-31). Rama learns from the boys that Sita is their mother and faints. Valmiki arrives and explains everything. Sita, however, will not return with Rama to Ayodhya: she takes refuge with her mother, Bhumi, the Earth Goddess.

Additional reading: Remember that Sita was born from a furrow in the earth: Sita's Birth. You can read more about Bhumi-Devi, the Earth-Goddess, at Wikipedia.