This is a guide to Ganga: The Divine Beauty (Volume 515). You can find it at Amazon.

Summary: Asuras who hide in the ocean are tormenting the people of earth, so Vishnu sends the gods to Agastya, who agrees to drink up the whole ocean, and it remains dry until the sons of Sagara set in motion a chain of events that brings the goddess Ganga to earth. When Sagara performs the Ashwamedha horse sacrifice, Indra steals the horse, so he sends all 60,000 sons in search of the horse; when they accuse Kapila of having stolen the horse, he burns them all to ashes. Sagara then sends his grandson Amsuman to see what happened. Amsuman retrieves the horse and discovers his uncles' ashes. Amsuman's own grandson Bhagiratha performs penances to bring Ganga down to earth, with Shiva protecting the earth from the power of her descent. When Ganga's waters disturb the sacrifice of Jahnu, he drinks her, but finally he relents and lets her go. Ganga fills the ocean and purifies the ashes of the sons of Sagara. 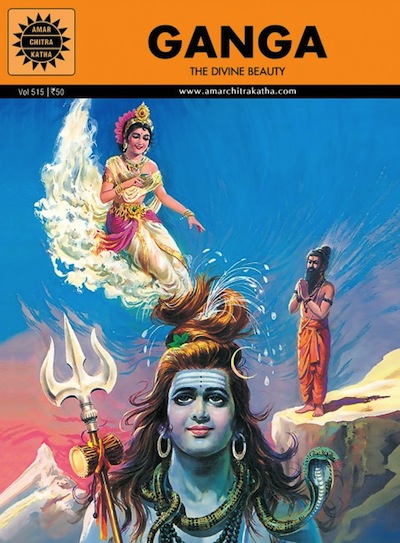