This is a guide to Tales of Shiva: The Mighty Lord of Kailasa (Volume 549). You can find it at Amazon.

Summary: The first story, Shiva and Arjuna, is about Arjuna worshiping Shiva in the Himalayas; Shiva disguises himself as a kirata (hunter) to test Arjuna, and they both hunt Mukasura, a boar-demon. After they fight over the boar, Shiva is impressed and grants Arjuna one of his divine weapons: the Pashupata. The second story, Shiva the Fisherman, Shiva curses Parvati to be born as a fisherwoman. Shiva then takes the form of a fisherman in order to win Parvati's hand in marriage by defeating the shark (Nandi in disguise) who is terrorizing the village. The final story, Shiva and Markandeya, tells about the birth of the sage Markandeya and how Shiva saved him from Yama, the god of death. 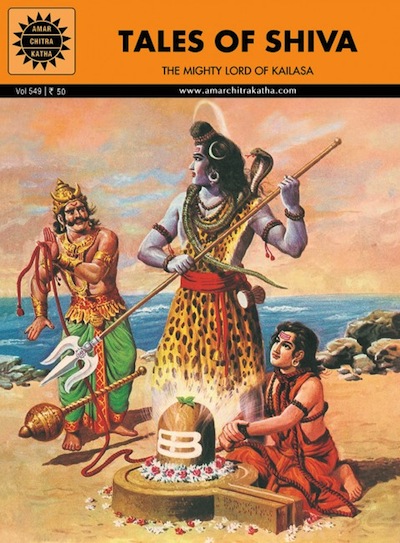