Guide: Krishna and the False Vasudeva

This is a guide to Krishna and the False Vasudeva: Pride Meets Its Doom (Volume 639). You can find it at Amazon.

Summary: This is about Vaasudeva, King of Pundra  — and the plot of the story depends on the fact that Krishna's father is also named Vasudeva, so Krishna is sometimes called "Vaasudeva," son of Vasudeva. As a friend of Shishupala, Vasudeva is dejected when Rukmini decides to elope with Krishna instead of marrying Shishupala. To cheer him up, the courtiers decide to worship him as the true Vaasudeva, declaring Krishna to be an impostor. Krishna defeats the false Vaasudeva, and he slays the King of Kashi as well, which prompts the king's son, Sudakshina, to attempt a supernatural revenge. You can read more about Krishna's enemies, including Shishupala, at Wikipedia: Krishna. 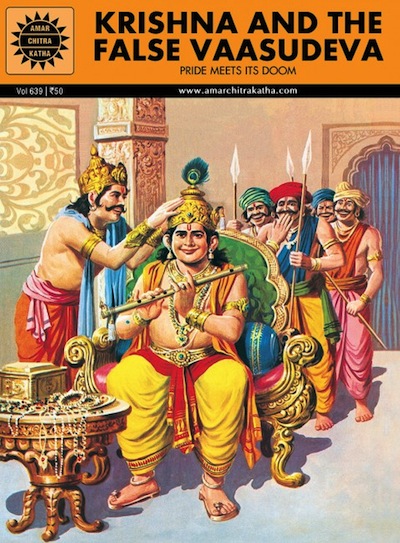