This is a guide to Garuda: Vishnu's Divine Mount (Volume 547). You can find it at Amazon.

Summary: The sage Kashyapa's wives ask for sons: Kadru wants a thousand snakes (nagas), and Vinata asks for two sons as powerful as those snakes. Indra and the tiny Valakhilyas prepared the sacrificial fire, and to humble Indra the Valakhilyas pray that another Indra be born: he will be the lord of winged creatures, Garuda. Kadru's children hatch first, and the impatient Vinata cracks open one of her two eggs too early; her son Aruna, the sun's charioteer, is not fully formed. She waits until Garuda hatches and he then frees her from enslavement to her sister as a result of their bet about the color of the tail of Uchchaihshravas, the cosmic horse (Kadru cheated). To free his mother, Garuda must steal the heavenly amrita; he does so, but he also enables Indra to steal it back! 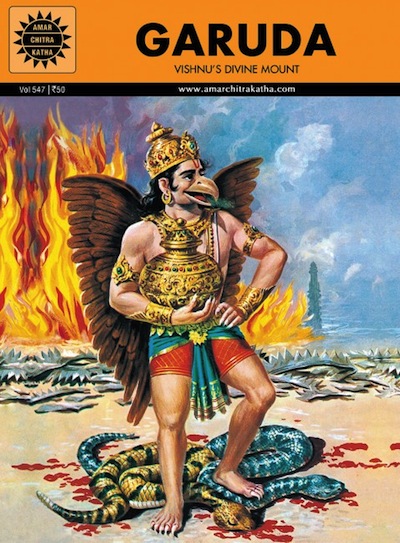