This is a guide to Jayadratha: Retold from the Mahabharata (Volume 653). You can find it at Amazon.

Summary:  The story begins with Dushala, the only daughter of Dhritarashtra and Gandhari, who is married to Jayadratha, king of Sindhu. He tells her how her brother Duryodhana won a gambling match and forced the Pandavas and Draupadi into exile. Jayadratha resolves to kidnap Draupadi, but the Pandavas catch and punish him. Jayadratha vows revenge, and is eager to fight the Pandavas in the great war as Duryodhana's ally, but when Jayadratha helps to engineer the death of Arjuna's son Abhimanyu, Arjuna swears that he will kill Jayadratha before sunset. The story ends with Arjuna's supernatural revenge. You can read more about Jayadratha at Wikipedia. 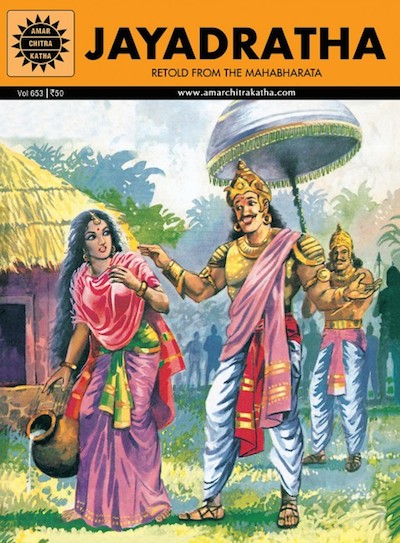