Guide: Hanuman to the Rescue

This is a guide to Hanuman to the Rescue: Hanuman Brings the Sanjeevani (Volume 513). You can find it at Amazon. 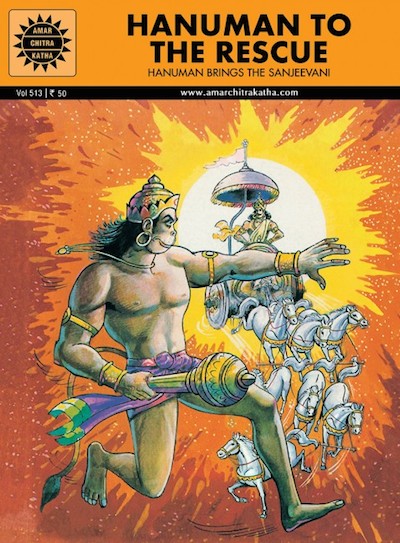 Hanuman's Quest (pp. 1-6). Ravana, king of the rakshasas, strikes Rama's brother Lakshmana in battle with his spear. Rama begs the monkey Sushena to save him, but he needs the Vishalya Karani herb from distant Mount Gandhamadana, and he needs it by dawn of the next day. Hanuman vows to get the herb. He grows to gigantic size and flies away. Ravana sees him in the sky and summons the monster Kalanemi to pursue and destroy Hanuman. Kalanemi tries to refuse, but finally agrees to Ravana's plan.


Additional reading: As you can see from the title of the comic book, there are different medicinal herbs mentioned in different versions of this story. One name is sanjeevani, whose scientific name is Selaginella bryopteris; there is an article about that medicinal herb at Wikipedia. The specific mountain that Hanuman brings back also has different names in different versions; you can read about Mount Gandhamadana at Wikipedia, and also about the Gandhamardan Mountains.

The Crocodile (pp. 7-12). Kalanemi travels by magic to the mountain and disguises himself as a hermit. He then insists on entertaining Hanuman as his guest, urging him to bathe in the river where he knows there is a mighty crocodile. Hanuman defeats the crocodile and from its dead body emerges a heavenly dancer who had been cursed by Indra to live as a crocodile. She warns him about the hermit.


Additional reading: The celestial dancer is called an apsara; you can read more about the apsaras at Wikipedia.

Hanuman and the Sun (pp. 12-19). Hanuman confronts the hermit, and Kalanemi reveals his true form. They fight, and Hanuman throws the monster all the way back to Lanka! Ravana then summons Surya, the sun god, whom he had conquered in an earlier battle, and he orders the sun to speed up the day so that Lakshmana will die before Hanuman returns. The sun rides out in his chariot, and Hanuman is shocked to see such an early dawn, so he decides to stop the sun. The sun says he wants to help Rama but fears Ravana, so Hanuman takes the sun under his arm and then carries on searching for the herb.


Additional reading: You can find out more about Surya, the sun god, at Wikipedia.

Hanuman and the Mountain (pp. 19-23). Hanuman asks some gandharvas for help, but they have never heard of Rama. Hanuman gets angry, grows to a gigantic size again, and then kicks the gandharvas. Remembering his quest, Hanuman goes back to searching for the herb. In desperation, he decides to just bring the whole mountain back with him. Rama is amazed to see Hanuman flying through the air, carrying a mountain.


Additional reading: The etymology of the Sanskrit word gandharva is probably connected to the Greek word centaur. You can find articles about both creatures at Wikipedia: gandarvas and centaurs.

Lakshmana Healed, Sun Freed (pp. 23-30). Sushena is able to find the herb on the mountain and revive Lakshmana. Hanuman then makes a return trip to take the mountain back where it belongs. Ravana sees him flying through the sky once again and sends seven rakshasa assassins to attack him. Hanuman uses his tail to defend himself, leaving one rakshasa alive to take the news of their defeat to Ravana. Hanuman also uses the herb to heal the gandharvas that he had attacked previously. Hanuman then flies back again to Rama's camp in Lanka, and Rama asks him about the glow under his arm. Hanuman explains that he is holding the sun prisoner, and Rama orders Hanuman to release him. The sun returns to the sky, and Rama thanks Hanuman for having saved Lakshmana's life.


Additional reading: For a long-ago encounter between Hanuman and the sun, see the famous episode at Wikipedia in which Hanuman mistakes the sun for a mango and tries to eat it.